Klopp has 'nothing to say' about Salah's contract negotiations

Who makes our Champions League team of the week?

Kylian Mbappe transfer declaration made amid Liverpool and Madrid 'interest'

The players with the most appearances in Champions League history

Posted Wednesday 15th September 2021 on Empire of The Kop

How the continent's Champions League heavyweights are shaping up

Cristiano Ronaldo has hit the stratosphere in the Champions League

Erling Haaland: Real Madrid are favourites to sign the Norwegian striker next season

Posted Thursday 9th September 2021 on Leeds All Over

Eduardo Camavinga jets into Madrid ahead of Real unveiling

Posted Tuesday 7th September 2021 on To The Lane And Back

‘I go to war with you’: £30m Atlético Madrid ace sends message to Tottenham player

Bale opens up on Real Madrid return and retirement rumours

Saul 'not very satisfied' with Atletico Madrid despite moving to Chelsea

How Real Madrid can land Erling Haaland, Kylian Mbappe and Paul Pogba next summer for £68m

Eden Hazard insists he will 'prove his worth' at Real Madrid

Liverpool, Kylian Mbappe and the transfer pitch that could disrupt Real Madrid 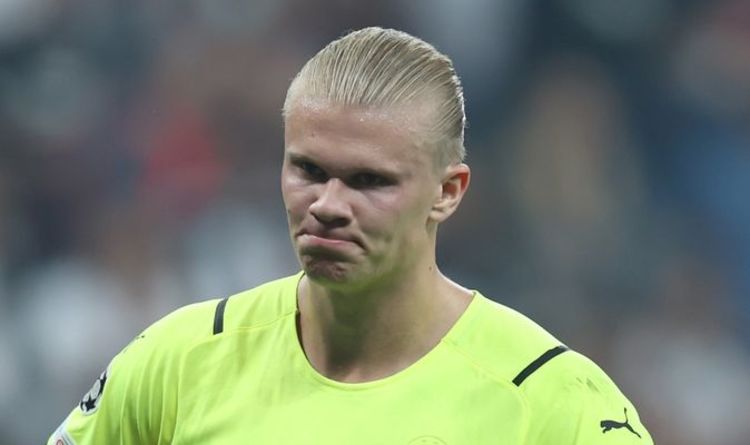 Erling Haaland has sensationally clashed with Mino Raiola over his next transfer, according to reports. The Borussia Dortmund has been widely linked with most of Europe’s biggest clubs, including Premier League sides Manchester United and Chelsea.

The prolific striker did not secure a move in the summer transfer window, despite the Blues’ interest, but could depart the Bundesliga side in 2022.

Chelsea wanted to sign a striker but landed Romelu Lukaku instead of Haaland, who was apparently valued at around £150million.

Haaland, who is contracted until 2024, has started the season in excellent form. He has scored 14 goals in 10 appearances for club and country.

Erling Haaland has been linked with a Borussia Dortmund transfer exit (Image: GETTY)

His performances have put clubs on alert ahead of a strongly contested chase for the Norwegian’s signature next year. The 21-year-old is set to be the subject of one of the biggest transfer sagas in recent history.

And Haaland has apparently clashed with his agent over which club he will join. Real Madrid news website Diario Madridista has claimed that Haaland wishes to join Los Blancos.

However, Raiola allegedly wants his client to move to Barcelona, where he could become Lionel Messi’s heir.

The difficulty with Raiola’s wish is that Barca have struggled to register their new signings.

Sergio Aguero, Memphis Depay, Eric Garcia and Luuk De Jong all arrived at the Nou Camp in the summer. Several players had to depart or take wage cuts for the new players to be registered.

But that will surely not prevent Premier League sides also entering the race. Chelsea’s signing of Lukaku means that it is unlikely that they will try to sign Haaland, but United could go back in for the player.

It has been widely reported that Haaland’s father, the former Manchester City defender Alf-Inge, and Raiola held talks with both Real and Barca before the summer transfer window.

He was also linked with a sensational transfer to Paris Saint-Germain, where he would join Messi, Neymar and possibly Kylian Mbappe in an incredible front line. Mbappe is also believed to be a target for Real, though.

It has been suggested that Haaland might have a decreased release clause in his contract in 2022 but that has not been confirmed.

Dortmund sporting director Michael Zorc became frustrated by constant rumours during the summer window, telling Kicker two days before the deadline: “We are a football club, not a bank. Our position is very clear and did not change.

“I assume that we will now be confronted with wild rumours for another two days. Our position is clear, I don't need to play the parrot all the time."