Middlesbrough 1-2 Blackpool: Tangerines come from behind to win at Riverside Stadium

Bamba's return after cancer a 'victory'

Leicester were 'in touch' with Middlesbrough over Spence

Report: Southampton and Leicester missed out on deadline-day target with ‘enormous ability’

From PSG, Barcelona and Wrexham: The 18 former Newcastle United players on the move this summer

‘At the last minute’: 22-year-old explains why he rejected Middlesbrough move

Luton - This Player Could Be The One

Rodgers plans to be ruthless with Leicester stars if rules broken

Middlesbrough still in talks to sign striker – Player 'won't give up one cent' of wages, hope deal gets done soon

Posted Tuesday 24th August 2021 on Pain In The Arsenal

What happens when players go back to former clubs?

Rooney Addresses The Media Ahead Of Middlesbrough Test

Jagielka Discusses His Derby Debut And Looks Ahead To Middlesbrough Clash

Davies The Man In The Middle For Derbys Clash With Middlesbrough

Middlesbrough 2-3 QPR: Willock on target to deliver Chris of life

Under18s Get 202122 Season Underway With 30 Win At Middlesbrough

Signing for Middlesbrough is 'possible destiny' for player - €6-6.5m wanted for transfer

Under18s To Get New Season Started At Middlesbrough On Saturday

'Why would I sell him to Warnock?'

'Why would I sell Brown to Warnock?'

Posted Thursday 12th August 2021 on Pain In The Arsenal

Middlesbrough 1-2 Blackpool: Tangerines come from behind to win at Riverside Stadium
Sky Sports 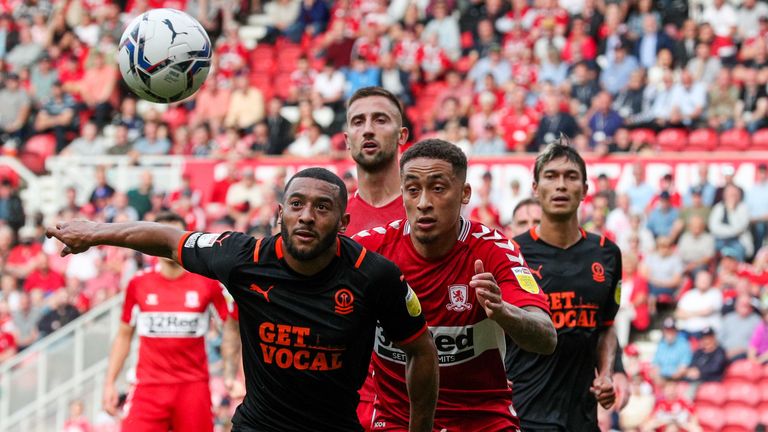 Blackpool came from behind in the second half to win 2-1 win at Middlesbrough and avoid a slide into the bottom three of the Sky Bet Championship.

And Middlesbrough defender Grant Hall was left with his head in his hands after he turned a corner into his own net in the 78th minute to hand Blackpool a second win since returning to the second tier of English football.

Ekpiteta and Tavernier's goals drew complaints from the opposition and in the end it was Hall's own goal that proved decisive in giving Neil Critchley's side all three points.

Image: Blackpool came from behind to beat Middlesbrough

It looked like Middlesbrough were set for back-to-back wins after the midweek success at Nottingham Forest.

On loan Norwich player Onel Hernandez and Tavernier's quickly taken corner resulted in James Lea Siliki, on loan from Rennes, clipping a ball to the back post.

Dael Fry was allowed the space to knock a pass back across the six-yard box, where Tavernier had coasted in undetected to convert from close range. The calls for offside centred on a flick-on from Lee Peltier before it arrived at Fry's feet.

Blackpool should have levelled six minutes later when Ryan Wintle's cross found Tyreece John-Jules unattended at the back post. He looked certain to score but fired over after turning inside Fry.

Otherwise it was Middlesbrough who threatened the most in the opening half an hour, even though Blackpool goalkeeper Chris Maxwell did not have too much to do.

Andraz Sporar, on loan from Sporting Lisbon, came closest to adding to the lead during that period when his first time effort from Tavernier's pass hit the woodwork.

After the restart Blackpool sensed they could get back into the contest.

With the hour approaching Shayne Lavery poked his foot out to direct an effort towards goal after Middlesbrough goalkeeper Joe Lumley made a mess of a cross into the box. The effort shaved the post and went wide.

Not long after, with Boro boss Neil Warnock and his players fuming about a couple of decisions from referee David Webb, the experienced Richard Keogh received a quick free-kick.

His delivery to defensive partner Ekpiteta was brought down on his thigh and the defender turned Fry before beating Lumley brilliantly. The goal set up an exciting finish.

Sporar went close first for the home side when he darted beyond his man before seeing a low effort well saved by Maxwell.

But it was Blackpool who got the decisive third goal of the game with 12 minutes remaining when Hall knew very little about Luke Garbutt's corner hitting him and finding his own net.

After that, Boro tried to push in search of avoiding defeat. Substitute Martin Payero curled 25-yard drive against the crossbar before his free-kick was then saved by Maxwell.

However, Blackpool - impressive throughout the second half - continued to threaten and it was the travelling support who were left celebrating at the end of six additional minutes of time.