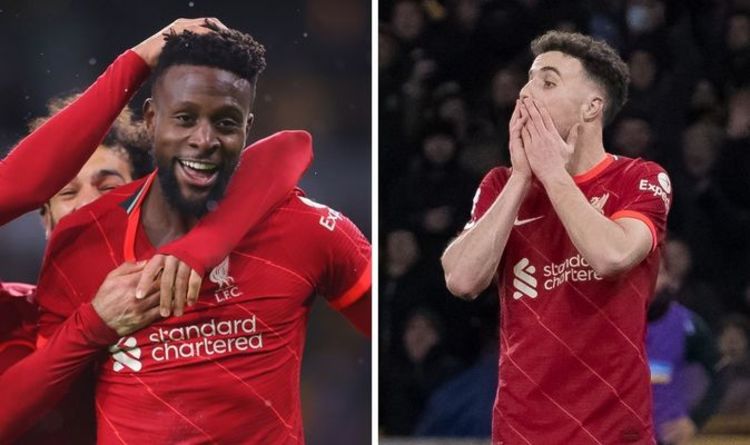 Diogo Jota's blushes were spared on Saturday when Divock Origi fired home a dramatic 94th-minute winner at Wolves. Liverpool had plenty of chances to net the opener but as the hosts ran down the clock, it didn't look like it would happen despite the relentless pressure from the Reds.

Jota missed, without doubt, the best chance of the bunch when he picked up the ball after a mix-up at the back with goalkeeper Jose Sa.

But as Jota bared down on goal, two Wolves defenders managed to position themselves on the line in a bid to keep their former team-mate at bay.

With two corners to aim at, Jota hit the panic button and hammered the ball straight down the middle of the goal where it met Coady's midriff.

Thankfully, it did not come back to haunt Jota as Origi eventually netted the last-gasp winner to earn his side all three points in the Black Country.

A relieved Jota could be seen barely celebrating the goal as the Liverpool bench erupted and spilled onto the pitch.

But deep down, he will have been over the moon that the Reds did not choke all three points.

Jota made his gratitude to Origi known on social media with a simple comment that left fans in stitches.

A whole host of Liverpool's players paid tribute to Origi - who is, without doubt, a club legend - for his latest clutch goal.

The former Lille man has built a reputation for coming up trumps in moments of huge pressure to earn his side important victories.

The run first started with his injury-time winner in the Merseyside derby at Anfield in December 2018 when the ball bounced off Jordan Pickford's crossbar.

It was the start of a sensational streak that also included a memorable brace against Barcelona in the Champions League semi-final as well as a late winner at Newcastle during the Premier League title run-in.

Origi also netted Liverpool's second in the Champions League final to clinch the game for the Reds at the Wanda Metropolitano.

It's claimed Jurgen Klopp simply told Origi "to go on and be Divock Origi" before summoning him from the bench.

“(Origi) is an incredible striker and for different reasons, he did not play that often, but I hope one day he finds a manager that plays him more than I do,” Klopp said.

“He’s one of the best finishers I’ve ever seen in my life. In this great team, with our (front) three, he doesn’t play all the time but he is a very positive boy, loves the club, wants to contribute and he did in an incredible way.”