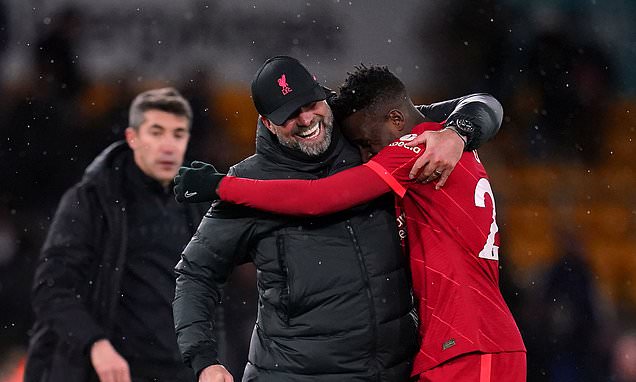 Jurgen Klopp hailed Divock Origi as one the best finishers he has ever seen after the Belgian international scored a dramatic added time winner for Liverpool at Molineux.

Liverpool looked as if they would fail to score for the first time this season until Origi, who had come on for Jordan Henderson in the 67th minute, finally made the breakthrough in the fourth of five minutes of added time to shatter Wolves.

The Belgium international swivelled on to Mo Salah’s cross to send a close range shot past Jose Sa to ensure the Merseyside club took advantage of Chelsea’s defeat at West Ham to to leapfrog their title rivals into second place.

Origi rarely starts because Mo Salah, Sadio Mane, Diogo Jota and Roberto Firmino are all ahead of him in Klopp’s pecking order but has a habit of scoring crucial goals - he got two in the famous Champions League semi-final win over Barcelona and one in the final against Tottenham in 2019 and has netted five in Merseyside derbies.


Klopp expected a club to try and sign him last summer - and fully expects interest when the window opens in January - but doesn’t want to lose him.

'Divock Origi, the legend, finished it off and it’s a great story,' he said.

'I told him when he came on it was his game. This kind of goal we see plenty of times, in training.

'Winning in the 95th minute is great but Div scoring it is even better. He has scored some of the most important goals in the history of this club.

'He’s an incredible striker, for different reasons he did not play that often but I hope one day he finds a manager that plays him more than I do.

'He’s one of the best finishers I’ve ever seen in my life. In this great team, with our [front] three, he doesn’t play all the time but he is a very positive boy, loves the club, wants to contribute and he did in an incredible way.

'If I would be in another club I would go for him. I thought that would happen but I cannot believe if you don’t play for Liverpool, you cannot be good. But I am very happy he is still here.'

Klopp was hugely relieved to take all the three points after Liverpool had missed several good chances and looked as if they would fail to score for the first time this season.

'It is really important and it feels big,' he added. 'We said it after the game, it was like in our good old times, two years ago, when we really needed it. I

'It is an important skill to stay positive to the end. It has not been needed too often this season but it is still an incredibly important skill and thank God we could show it today.

'It is not a lucky win, we had chance after chance but did not score. I think a point would have been lucky for Wolves.'

Wolves failed to score for the fourth time in five games but boss Bruno Lage said:

'My players did everything I asked of them. We created a lot of problems for Liverpool. It [conceding a 90th minute goal] has happened twice for us - against Leeds and now today. We’re disappointed but this is football. We need to move on'