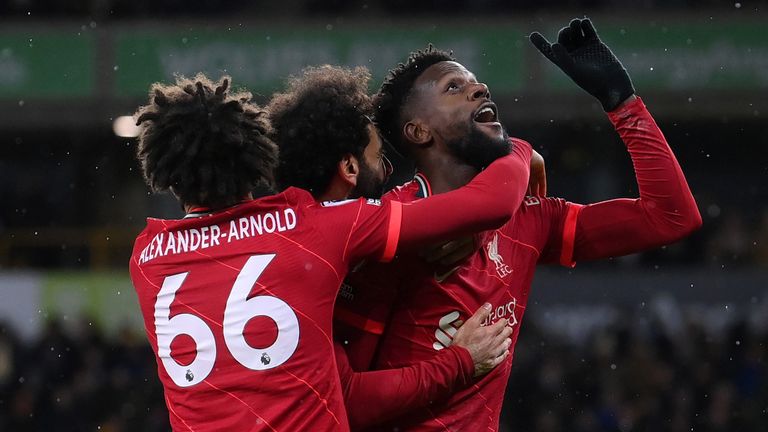 Divock Origi came off the bench to score a stoppage-time winner as Liverpool’s 1-0 win over Wolves at Molineux took them top of the Premier League.

But their resistance was broken in the 94th minute when Mohamed Salah set up Origi who swivelled and turned home from close-range, sparking wild celebration in the away end.

Chelsea's defeat to West Ham earlier in the afternoon had given Liverpool the chance to leapfrog them and while Manchester City could still overtake them later in the day, this felt like a huge three points for Jurgen Klopp's side as they came so close to being denied by Bruno Lage's men.

Man of the match: Rayan Ait-Nouri

Klopp's team had to be patient as they probed for the opening and the chances came in a flurry from the midway point in the half as the full-backs pushed forward.

Thiago's delicious dinked pass in behind the Wolves defence found Trent Alexander-Arnold but he could only volley over. The England man then turned provider for Jota who headed wide at the far post - much to the delight of the fans who had once cheered him.

Liverpool's threat comes from both flanks, of course, and the opener looked an inevitability when Jota was able to thread Andy Robertson through in the left channel but his inviting cross was somehow missed by Salah under pressure from Romain Saiss.

Just as Wolves looked to be cracking they were able to conjure a couple of counter-attacks that reminded Liverpool of the danger. The impressive Rayan Ait-Nouri was even able to fashion a good opening by beating two men before blazing wide with his weaker foot.

In the second half, the pattern of Liverpool domination resumed and Jose Sa was fortunate to save from Thiago when Raul Jimenez's clearance ricocheted off the midfielder.

The pressure was building with Wolves' breakaways becoming rarer and rarer even as Traore enjoyed his moments - frequently fouled as Liverpool tried to contain him.

Wolves made once change as Ruben Neves returned from suspension with his compatriot Joao Moutinho making way as Leander Dendoncker retained his place. Bruno Lage was also able to welcome back Daniel Podence who was named among the substitutes.

With Champions League progression assured, Jurgen Klopp was not too concerned about the game away to AC Milan on Tuesday evening so it was the full force of Liverpool that he unleashed on Wolves. That saw Liverpool unchanged from their Merseyside derby win.

But the missed chance of the game arrived on the hour after Sa missed the ball when racing off his line to allow Jota through. A goal looked inevitable even with defenders on the line.

Jota took aim but somehow only managed to find Coady who heroically kept the ball out. Molineux erupted and it made for a frenzied final third of the game as Liverpool pushed.

Sadio Mane found a good position but his touch let him down. Robertson came close after carrying the ball into the box but Ait-Nouri cleared at the last. It was tense.

Mane had an even more promising moment with just minutes remaining but his effort was brilliantly saved by Sa. Salah scuffed a 90th-minute shot that the goalkeeper stopped.

That looked to be that but with Ait-Nouri having been replaced by Ki-Jana Hoever, Salah finally found space as his fine touch took him away from his new marker and through.

The cut-back found Origi - so often Liverpool's talisman - and his left-footed shot went through the legs of Coady, beating Saiss and Sa on the line.

It was cruel on Wolves who looked on course for a third goalless draw in a row - one that would have been more celebrated than the previous ones. Instead, Liverpool march on.

● Divock Origi's strike was Liverpool's 39th winning goal scored in 90+ minutes in the Premier League, at least 13 more than other side.

● Liverpool have scored in each of their last 25 Premier League games, since a 0-1 loss against Fulham in March.

● Liverpool have kept more clean sheets than any other Premier League side this season (9), while only Norwich City (8) have netted fewer goals than Wolves (12).

● Wolves had just three shots in this game, their fewest in a Premier League match since March 2019.

● Divock Origi's goal was his 10th as a substitute in the Premier League for Liverpool - no player has netted more from the bench for the club in the competition.

● Liverpool's Mohamed Salah has either scored or assisted a goal in each of his last 13 appearances in the Premier League. The Egyptian tops the charts for both goals (13) and assists (9) in the competition so far this term.

Wolves take on champions Manchester City at the Etihad on Saturday December 12 (12.30pm), while Liverpool travel to face AC Milan in their final Champions League group-stage clash on Tuesday (8pm), before hosting Aston Villa in the Premier League on December 12 (3pm).