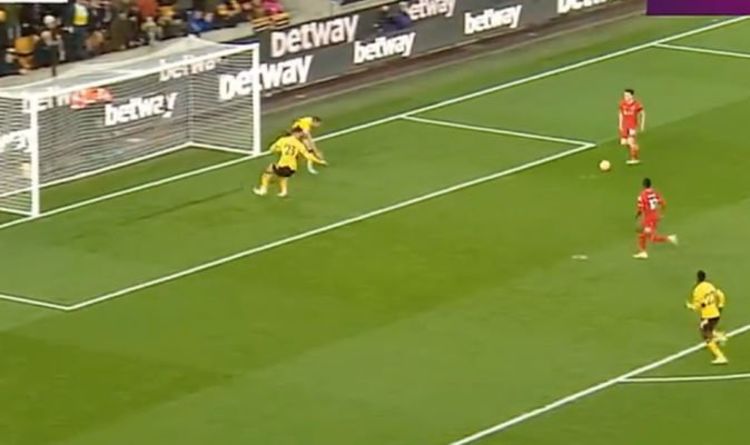 Liverpool forward Diogo Jota was guilty of an unbelievable miss against Wolves on Saturday afternoon as he thrashed the ball straight into Conor Coady with the goal at his mercy. The Reds struggled to find a way through the Wolves defence at the Molineux Stadium and were being held to a goalless draw when Jota fluffed his lines on the hour-mark. Jurgen Klopp's men eventually found a winner courtesy of Divock Origi's strike deep into stoppage time at the end of the match.

Liverpool went into their Black Country encounter looking to leapfrog Chelsea at the top of the Premier League table after the Blues had suffered a shock defeat at the hands of West Ham hours earlier.

But they were frustrated by Wolves for almost all of the match as Bruno Lage’s side showed tenacity and commitment to keep the Reds at bay.

The match looked destined to end in a stalemate as Wolves battened down the hatches and repelled everything that came their way.

But the top teams have a tendency to produce magical moments when it matters and eventually found a winner at the death as substitute Origi turned in the box and fired past the helpless Jose Sa.

Origi's late strike would have come as a welcomed relief to Jota, who had Liverpool’s best chance to open the scoring after home keeper Sa had raced out of his goal but had failed to win the ball.

Liverpool forward Diogo Jota was guilty of an unbelievable miss against Wolves on Saturday (Image: ESPN/TWITTER)

The Reds striker dribbled into the box unopposed as Coady and Max Kilman ran back to their own goal-line.

With virtually the whole goal to aim for, Jota inexplicably fired the ball straight into Coady as Wolves survived with their goal intact.

Liverpool fans took to Twitter in the aftermath of the shocking miss to show their dismay at what they had just witnessed.

“I don't believe the chance Diogo Jota has just missed,” wrote one fan, with another supporter describing it as the “worst miss of the season.”

Liverpool forward Diogo Jota fluffed his lines when faced with the chance to give his side the lead (Image: ESPN/TWITTER)

The Reds could move down to second on Saturday evening, however, if Manchester City beat Watford at Vicarage Road.

The Citizens will be big favourites to beat the Hornets after winning their last four Premier League matches.

But Pep Guardiola’s side will need to be wary of their opponents after Watford thumped Manchester United 4-1 last month.