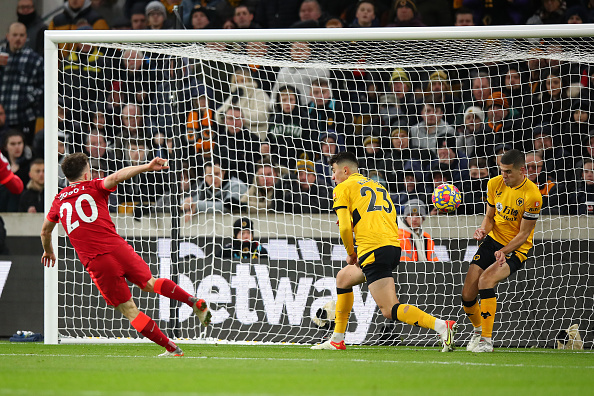 Jermaine Beckford has expressed his shock on BBC Sport at Diogo Jota’s miss for Liverpool against Wolverhampton Wanderers at Molineux Stadium on Saturday afternoon.

The former Leeds United and Everton striker could not believe that Jota could not finish off his chance in the second half of the Premier League game between Wolves and Liverpool.

The Portugal international forward found himself inside the Wolves penalty area with an easy chance.

Jota, who cost Liverpool £41 million (BBC Sport), had plenty of time  and two defenders on the line.

It should have been an easy finish for the 25-year-old, who had most of the goal to aim it.

Beckford said on BBC Sport: “Brilliant defending from Conor Coady don’t get me wrong, but how has Diogo Jota missed this massive, massive opportunity?

“He’s managed to pick the ball up and run towards goal and you’re saying it’s a guaranteed goal. I don’t know how but Coady’s found himself in the right place at the right time. Brilliant.”

Wow! That's the desire and commitment of a player not wanting to concede! Coady, superb! #WOLLIV

Jota’s miss could have proved costly for Liverpool had Divock Origi not scored a late goal.

The Belgium international striker came on as a substitute in the second half.

Origi found the back of the net in the fourth minute of injury time.