5 things from Klopp's pre-Wolves press conference
This Is Anfield 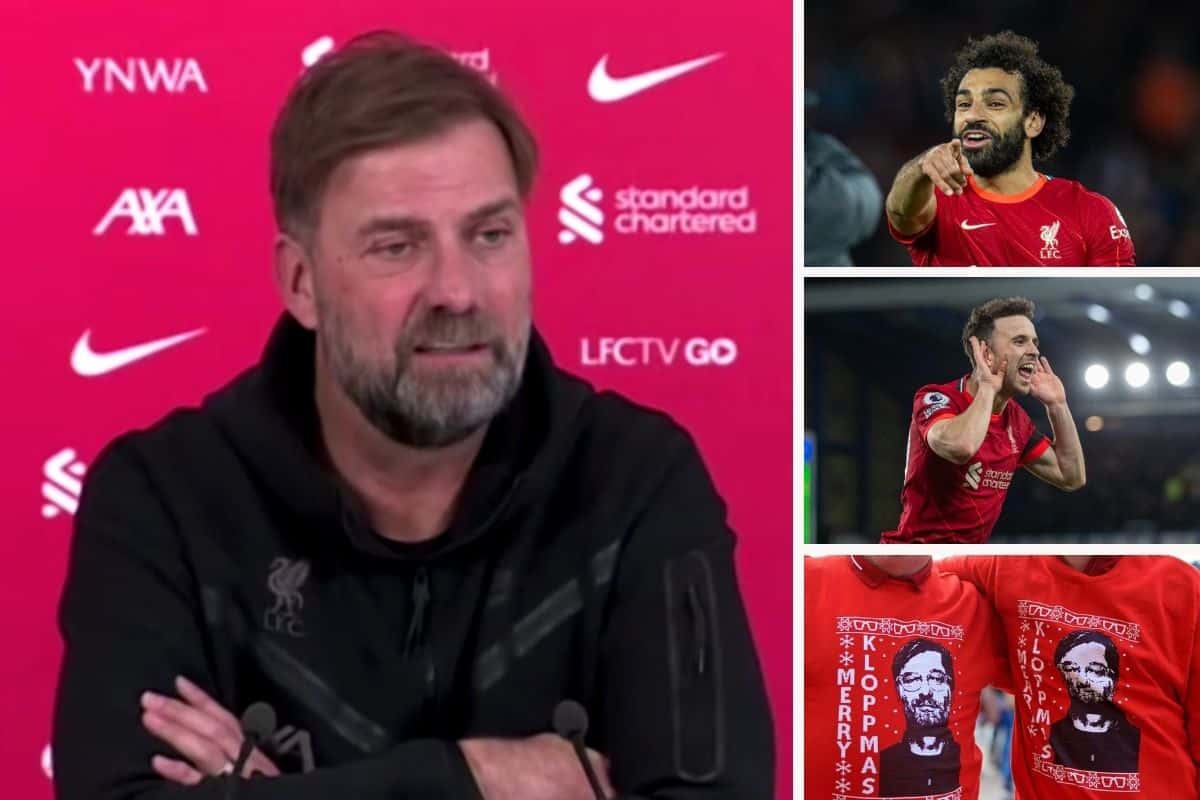 Jurgen Klopp was in a good mood as he looked ahead to Liverpool’s next challenge, praising Diogo Jota, providing a fitness update and Mo Salah‘s non-existent selfishness.

Here are five key points from the manager’s press conference ahead of Saturday’s game:

A lot of love for Jota

Liverpool’s No. 20 returns to his former stomping ground on Saturday in goalscoring form having notched nine in 17 appearances this season – which includes four in his last three league games.

And Klopp was full of praise for Jota and the “next steps” he has taken at Anfield.

“Diogo is an incredible package. Personality-wise an incredible boy. He is really smart, organised, structured in a very nice way,” Klopp said.

“I didn’t know that but it helps. I remember the first time I saw him I thought he could be a player for me because of how intense he was in all situations.

“Clear he would make the next steps with us and he did.”

Don’t expect too many changes

There was just one change from the win over Southampton to Everton and it could be a similar story, or even an unchanged XI, at Molineux on the weekend.

Naby Keita and Joe Gomez “looked brilliant” after joining in on training on Thursday but will not be in the squad and are set to be back in contention against Milan.

“We changed [the team] quite a lot in the last few weeks. I haven’t made the lineup yet but I wouldn’t expect seven or eight changes.

“I don’t think we need to make too many changes at the start of December, maybe towards the middle.”

The trip to Wolves is the second game of nine to close out 2021 and while Klopp is still dismayed by a two-day turnaround later in the month and while it is not “easy,” it is “doable.”

“It was crazy, it’s my sixth/seventh season and it is crazy and will always be crazy. Everything is fine until you reach Christmas time. [Playing] December 26 and 28 is still not right.

“We have to accept that and it’s a tradition but it’s really tough. We now have two months ahead of us which will be really difficult to deal with but the good news is all the teams is the same.

“It means we all have to dig in through that period. It’s 95 minutes every three days, super intense runs, challenges and all these kinds of things. Not easy but doable.”

“Is it already a title race?”

That was Klopp’s immediate question back to the reporter after being asked about the state of the league, which currently sees the Reds sit two behind Chelsea and one behind Man City.

It’s early days but there is no hiding from the fact that this is a crucial juncture of the campaign.

“It is a good, highest-quality league. We cannot win the league in November or December but we can lose it maybe. We have to chase everybody in every team we face.

“I can’t see it as a title race already but it is exciting.”

It’s a term that has been thrown Mohamed Salah‘s way more than once in the past and not in an endearing way.

But should anyone have still considered the No. 11 selfish, his seven assists in addition to his 19 goals and all-around play in 2021/22 have proven otherwise.

“We didn’t have a specific talk about it, it wasn’t necessary,” Klopp said of Salah. “These things happen naturally. He wasn’t criticised by us for being too selfish because he never was.”