'I didn't realise how bad the injury was'
BBC Sport 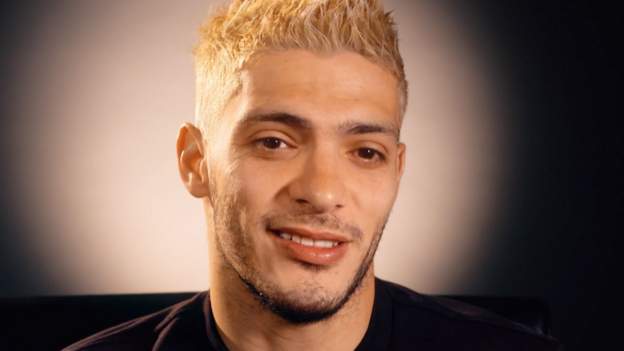 The chilling reality is that Raul Jimenez could have died on a football pitch.

On 29 November 2020 in a match against Arsenal, Wolverhampton Wanderers' talismanic Mexico striker suffered a sickening head injury that left him unconscious.

In the minutes that followed, his team-mates, manager and family watched on, worrying whether he was still alive.

It took Jimenez eight months to recover from fracturing his skull to playing for the Premier League club again. For six months, he was not allowed to train with other players.

Despite the challenges he faced, the 30-year-old told BBC Sport he never considered the possibility his career may be over.

"I was always so confident about coming back as the same player, or even better, that I didn't realise how bad the injury was," he said from Wolves' training complex.

In a new film on BBC iPlayer, Jimenez, his family, fellow players and former coach Nuno Espirito Santo tell the story of that horrific afternoon and his road to recovery.

'These moments will stay forever'

The injury that changed Jimenez's life arrived early in the match.

Wolves started well at Emirates Stadium and earned a corner. Jimenez, their main attacking threat and top scorer in his first two seasons with the Midlands club, prepared for a routine set-piece.

Moments later he was prostrate after suffering a horrific clash of heads with Arsenal defender David Luiz.

In the film, then Wolves manager Nuno breaks down as he remembers the incident. He says the sound still haunts him.

"There are things that you're able to put away from your memory, but these moments will stay forever," he said. "And then the noise - that will stay."

'I closed my eyes and just said 'please wake up''

Jimenez received treatment on the pitch for 10 minutes before being taken to hospital. It was tough for those who were there, but also agonising for his loved ones watching on at home.

His mother, Martha, had tuned into the match late.

"I turn on the TV and see my son lying on the pitch," she recalls in the film. "He doesn't get up and the clock ticks and ticks and I start to become desperate with all the anguish."

Meanwhile, his partner Daniela Basso was at home with their new-born daughter Arya.

"It's difficult to see your partner lifeless," she recalls in the film.

"I remember I closed my eyes and I just said 'please wake up, just move a little bit, just to know you're alive'."

'I don't remember much about the hospital'

Wolves' medical team were on the pitch to treat Jimenez almost immediately.

They diagnosed him with a fractured skull and he was given oxygen before being taken to hospital, with fears of potential brain damage.

When Jimenez came around after surgery, he didn't know exactly what had happened to him.

"The things that I remember are that we arrived at the stadium and I went out to see the pitch and then when I get back to the dressing room - I can't remember anything else.

"I don't remember too much about the hospital."

In the film, Wolves doctor Matt Perry explains Jimenez called his partner Daniela to ask the same questions - which can be typical with head injuries.

'I knew that I was coming back'

"The moment I woke up in hospital, I wanted to start playing," said Jimenez.

He turned up at the training ground three weeks after surgery.

Jimenez says he tried to think of it "like any other injury".

It wasn't just like any other injury, though. In the film, Wolves physiotherapist Ollie Reaper describes the kind of extensive cognitive tests they had to put Jimenez through in order to make sure he could still play.

He was also not allowed to train with other players for six months.

"Looking at everyone in training, without having any opportunity to be involved was tough, but they helped me too - to get back, to be confident."

Despite all that, he never considered a plan B.

"I was that confident that I never thought about anything else. I knew that I was coming back," said the striker.

His three times goals in the Premier League this season suggest he was correct to be confident he would recover from one of the most shocking injuries in the history of the top flight in England.