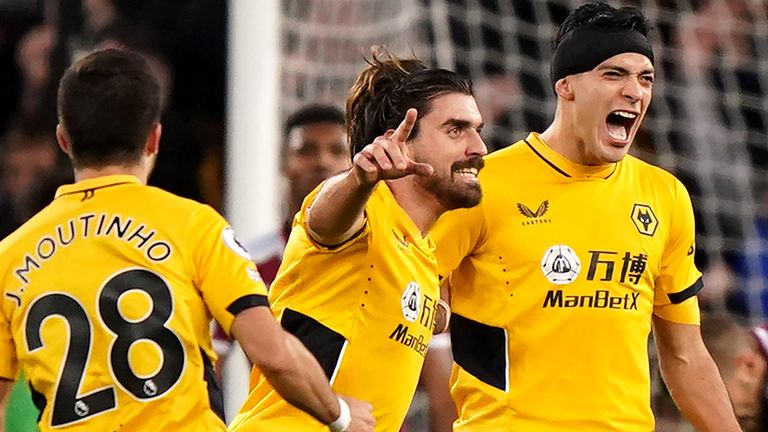 West Ham missed the chance to move second in the Premier League table as Raul Jimenez's 58th-minute strike secured a well-deserved 1-0 win for Wolves at Molinuex.

The Hammers completed their first league double over Wolves since the 1922-23 campaign last term, but they produced a flat display in the Midlands to check their progress.

Jimenez latched onto Daniel Podence's cross to strike the decisive blow 13 minutes into the second half meaning West Ham remain in third place ahead of the weekend's remaining fixtures.

Max Kilman blazed over a good chance for a late second but one would be enough for Bruno Lage's upwardly mobile side, whose fifth win in seven games means they sit sixth in the table having lost their opening three matches.

Image: Wolves were good value for their win over West Ham

Man of the match: Nelson Semedo.

Wolves were worthy winners as they celebrated a third straight top-flight win at home since November 1980 on an off-day for David Moyes' side.

This was the first of 13 games in all competitions in 43 days for the high-flying Hammers, who made only the fifth change to their starting line-up in the league all season owing to the serious knee injury sustained to Angelo Ogbonna in the 3-2 win over Liverpool.

Image: There was a minute's applause for former Wolves player Ron Flowers

This always had the makings of a compelling contest, the first managerial meeting between Bruno Lage and Moyes, and it was the visitors who had the first noteworthy opening as Aaron Cresswell's pinpoint delivery was headed wide by Jarrod Bowen after 10 minutes.

Craig Dawson replacing the injured Angelo Ogbonna in defence was the sole change to West Ham's starting line up as they took on Wolves at Molineux. Ogbonna, who looks set to miss the rest of the season due to the anterior cruciate ligament injury he sustained in the 3-2 win over Liverpool on November 7, had posted a message on Twitter earlier on Saturday saying his surgery "went well".

There was also one adjustment to Wolves' line-up, from their 2-0 loss at Crystal Palace, with Daniel Podence coming in for the benched Francisco Trincao.

Wolves had won their previous two home league games, as many as they had in their previous nine at Molineux, and they began growing into the encounter when shouts for a penalty were turned down by referee Mike Dean.

On the half-hour mark, Hwang Hee-Chan drove into the box but after his cross struck the arm of Ben Johnson, VAR Andre Marriner upheld Dean's decision not to award a spot-kick.

The incident did spark a period of sustained pressure on the Hammers goal, however, as moments later Jimenez strode onto Ruben Neves' excellent pass to dink an effort wide with only Lukasz Fabianski to beat.

Joao Moutinho was next to try his luck as Fabianski expertly tipped his long-range effort over before Romain Saiss was unable to direct his header inside the post from the ensuing corner.

West Ham had absorbed Wolves' best efforts and were then denied an opner against the run of play when Dean spotted an infringement by Michail Antonio on Jose Sa from Bowen's corner, which was headed into the net by Kurt Zouma only for it to be ruled out.

Lage's men had been the better of the two sides and Moyes will have demanded an improvement upon the restart but Wolves continued to dominate as Moutinho won a 50-50 ball with Rice to set up Podence for a low shot that was tipped around the post by Fabianski.

Podence was once again denied by the backpedalling Polish goalkeeper when he chipped an audacious effort towards the far post but two minutes shy of the hour mark, the hosts deservedly converted their pressure into an advantage.

It was Podence who turned creator as the forward was found in space down the right and his low cross was swept home expertly first time by Jimenez, with the Mexican finding the corner of the net beyond the reach of Fabianski.

Moyes will have been surprised at how little his side had created with Antonio's rising shot followed by an even better effort from Bowen as he escaped Saiss forming part of a belated response.

West Ham needed to show more adventure and be more daring as Lage signalled for substitute Adama Traore as an obvious outlet to help to absorb the inevitable late pressure.

But having collected six points from losing positions this term, West Ham were unable to stage a rescue act this time as their hopes of moving second in the table were extinguished.