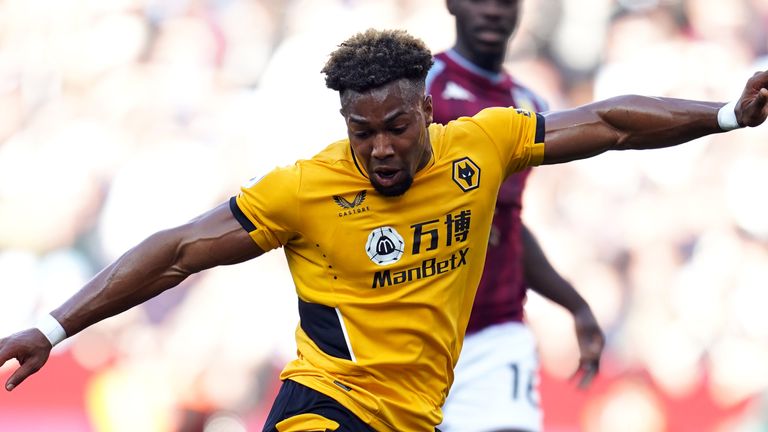 Team news, stats and prediction ahead of Wolves vs West Ham in the Premier League on Saturday; kick-off 3pm.

Adama Traore will be pushing for a return to the starting line-up when Wolves resume their Premier League campaign against West Ham at Molineux.

Full-back Fernando Marcal is in contention to feature for the first time since October 16 after recovering from a calf injury, although boss Bruno Lage has said that Rayan Ait-Nouri is set to keep his place in the side.

A decision will be made on Raul Jimenez's availability after the striker returned from international duty with Mexico on Thursday.

West Ham will be without Angelo Ogbonna, with the defender looking set to miss the rest of the season.

Ogbonna is to undergo surgery after suffering an anterior cruciate ligament injury in the 3-2 win against Liverpool last time out.

It appears midfielder Declan Rice, who withdrew from the England squad last week because of illness, is set to be available for Saturday's contest.

Follow Wolves vs West Ham in our dedicated live match blog. Highlights will also be published on the Sky Sports digital platforms and the Sky Sports Football YouTube channel from 5.15pm on Saturday.

FREE TO WATCH: Highlights from Crystal Palace's win against Wolves

FREE TO WATCH: Highlights from West Ham's win over Liverpool

I'm all over a West Ham win here at odds-against.

Having spent most of last season thinking the bubble will burst for David Moyes as he oversaw a classic case of overachievement, I've completely changed my view based on the continued excellent and consistent performances from the Hammers. Moyes has gone back to what made his Everton side so dangerous, making West Ham a tough outfit that play very much as a team and one that carry a huge goal threat.

The 100/30 with Sky Bet for them to finish in the top-four would be a serious bet for me if I had faith in Michail Antonio's body to hold up from injury. Here though, at 7/5 with Sky Bet, they are a generous price to beat a Wolves team that look on the downgrade following an impressive start to life under Bruno Lage.

Since beating Watford in September, Wolves have gone flat in forward areas. In their last seven matches, they have posted just 54 shots - that's 16 fewer than any other team. An expected goals figure of 7.4 in that period is fine on first viewing but dig a little deeper and becomes a tad more worrying. All of those seven fixtures have come against teams not in the top-nine of the Premier League table. Crystal Palace were insanely comfortable in their 2-0 victory before the international break with Wolves recording an expected goals figure of just 0.28.

The Hammers have lost just one of their last 17 games away from home against teams that finished ninth or lower according to last season's table, winning 12 of those 17, including beating Wolves 3-2 last season. That's a 71 per cent win-rate and we're getting odds-against here.

Moyes' boys are perfectly equipped to get the job done in these types of games.

Peter Smith is joined by Sky Sports pundit Graeme Souness, and football writers Oliver Yew and Ben Grounds to look ahead to the Premier League weekend.

PART 1 | How will Liverpool respond after their first defeat of the season? Graeme Souness explains why they'll be 'full throttle' against an Arsenal side who, he feels, are still a long way off, despite their recent unbeaten run

PART 2 | Oliver Yew and Ben Grounds look at the contrasting impacts of Jack Grealish and Gabriel Jesus this season, and discuss Fabien Delph's surprise return to form with Everton, ahead of his side's trip to a club he won two Premier League titles with

PART 3 | Harry Kane scored seven goals in two games during the international break but will that translate to the Premier League? We talk Tottenham ahead of Antonio Conte's first home league game in charge, and explain the reasons behind Leeds' slow start.