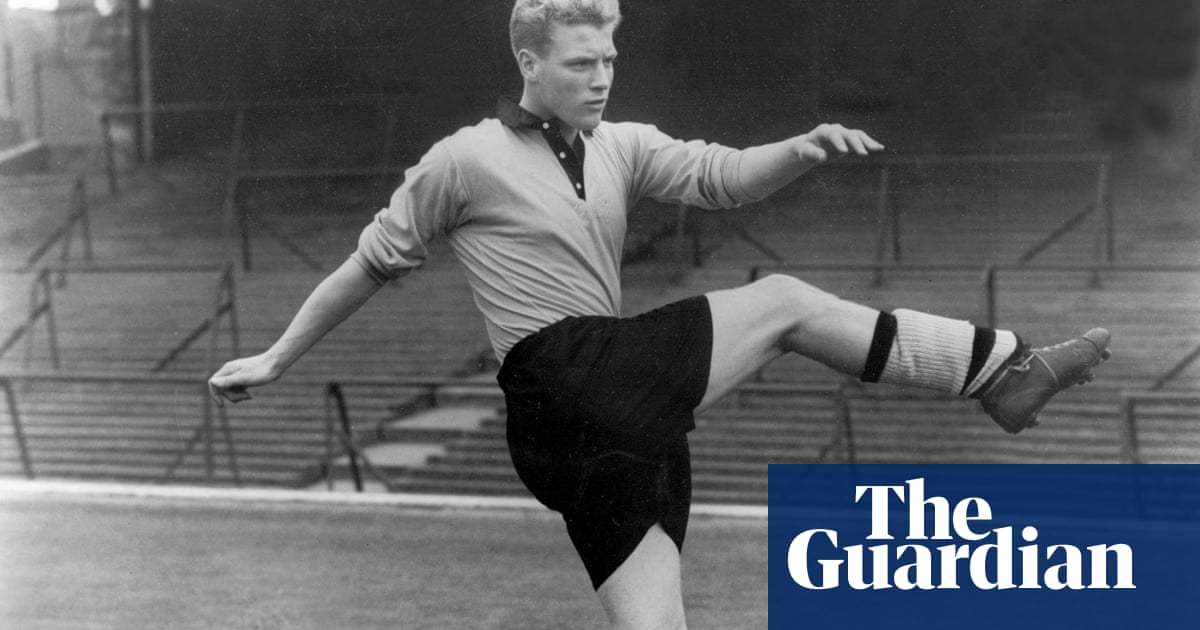 Ron Flowers, who has died aged 87, played football of such quality and consistency across such a prolonged period that his career was able to span not just a whole era of huge achievement at Wolverhampton Wanderers in the 1950s, but England’s victorious 1966 World Cup victory and beyond.

He won three First Division titles and an FA Cup with Wolves during a golden period at the club, and was 32 when called up for the 1966 World Cup finals as the oldest player in England’s 22-man squad. While he did not actually play in any of the matches during that tournament, he came agonisingly close to appearing in the 4-2 defeat of West Germany in the final. On the night before the match, Flowers was told by the England manager, Alf Ramsey, that Jack Charlton had taken ill – and that if he was no better in the morning then he would be in the starting lineup.

Ron Flowers with the 1953-54 Division One championship trophy Photograph: Rex/Shutterstock

After a sleepless night, it transpired that Charlton had made a recovery, and so Flowers had to sit out the match on the bench. Under the rules that then pertained, Flowers therefore did not receive a World Cup winners’ medal, although many years later football’s governing body changed its mind, and – along with a number of other members of the England squad – he took delivery of one at 10 Downing Street in 2009.

The 1966 tournament had been a second tilt at the World Cup for Flowers, who had played with distinction in the 1962 version in Chile. By that time he had been at the top level of the game for a decade with a great Wolves side, and had retreated from an attacking midfield position at wing-half to a more defensive role, playing at left-half for England with Bobby Moore, newly capped, on the right. Twice Flowers would show his cool accuracy from the penalty spot in Chile, first in the opening game, which was lost 2-1 to Hungary, and then in the 3-1 victory against Argentina in the third, before England lost to Brazil in the quarter-finals.

He had not looked quite so assured when he made his debut for England against France in Paris as a 20-year-old in 1955. Playing at wing-half, Flowers found that the long passing ethos of Wolves had become so ingrained in his play that he kept firing the ball ahead of Stanley Matthews to run on to, rather than directly at his feet, as the great winger always required. As a result, he did not play for his country for another three years.

However, Flowers returned to the fold in 1958 for a home international against Wales, and would keep his England place with only an occasional absence for the next seven years, having a run of 40 consecutive games at one point.

He was still there in 1966, playing against Norway in Oslo on the eve of the World Cup, although that match turned out to be the last of his 49 international caps. He captained his country three times and scored 10 goals, with a six-out-of-six penalty record.

Ron Flowers scores from the penalty spot for England in their 3-1 win over Austria at Wembley in 1962. He had a 100% conversion rate with the six penalties he took for his country. Photograph: Colorsport/Rex/Shutterstock

Born the son of a coalminer in Edlington, near Doncaster, Flower was spotted as a schoolboy playing for Edlington grammar school and then Yorkshire Boys. He developed his talents at Wath Wanderers, then a nursery team for Wolves, and signed for the Midlands club as a professional on his 18th birthday. The Wolves manager, Stan Cullis, gave him his debut a couple of months later in September 1952, against Blackpool. Flowers scored with a header in that match and played 20 games in the 1952-53 season, establishing himself as a regular attacking midfielder in a team that became a dominant force in English football for the best part of a decade.

With Wolves he won the First Division championship in 1953-54, 1957-58 and 1958-59 – and the FA Cup in 1960 after a 3-0 defeat of Blackburn Rovers. He also played in the pioneering “floodlit friendlies” at Wolves against continental European sides such as Honved and Real Madrid, which caught the imagination of the British public.

Eventually the good times ended, and Cullis was sacked in 1964 when Wolves were relegated. Flowers helped his team regain First Division status after two seasons, but left at the end of the 1966-67 season to become player-manager of Northampton Town, having played 515 games for Wolves.

At Northampton he made 62 league appearances, but in his second season the team were relegated to the Fourth Division, and in 1969 he switched to become player-manager at non-league Telford United, whom he led to the first ever final of the FA Trophy, losing 2-0 to Macclesfield Town in 1970. He lost his job at Telford in October 1971 and then moved out of the game to concentrate on running a successful sportswear store in Wolverhampton, which still flourishes. He was made MBE earlier this year.

He is survived by his wife, Yvonne Hart, whom he married in 1957, and their two sons.