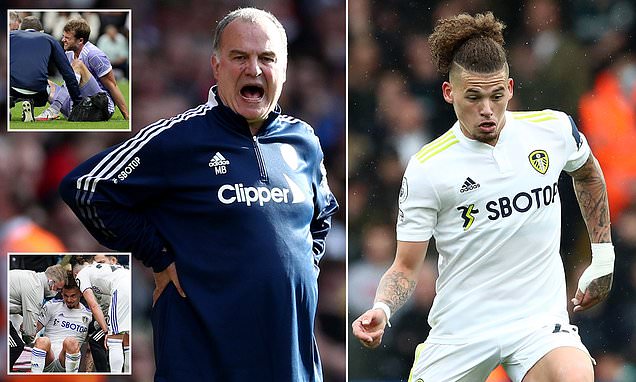 Marcelo Bielsa is refusing to rush star man Kalvin Phillips back to action despite Leeds’ poor start to the season.

The England midfielder missed last weekend’s 1-0 defeat at Southampton because of a calf and hip problem, which also ruled him out of international duty earlier this month.

Fans are desperate for Phillips to return against Wolves on Saturday, with Leeds hovering just one place above the relegation zone with only one league win so far this campaign.

But despite the 25-year-old training at Thorp Arch, United boss Bielsa insists it would be too big a risk to play him this weekend.


‘Kalvin is healthy, but he has not competed for three weeks,’ said Bielsa. ‘If he played on Saturday it would be far too quick. After three weeks out it's necessary for more training.

‘At this stage he has done sessions for recovery and physical preparation and progressive work with the ball. To think of him for Saturday would be too soon before his best.’

Leeds’ other England international, Patrick Bamford, is also out with an ankle injury and Bielsa confirmed the striker is set to sit out the next two games, although Brazilian forward Raphinha is back.

Bielsa also admitted the past week has been one of the most difficult of his Elland Road reign as he looks to pick up his players following their loss at St Mary’s.

‘Perhaps there's been five or six weeks, but this was among the most difficult,’ he added. ‘At Southampton, the distance between what we were looking for and what we got was very far and that was deserved.

‘For me, it was a very sad week, but in a parallel way, when errors are made and I know the errors we made, I know they could have been avoided if I had managed more efficiently.

‘I have a lot of strength, energy and willingness to avoid what happened there again.’