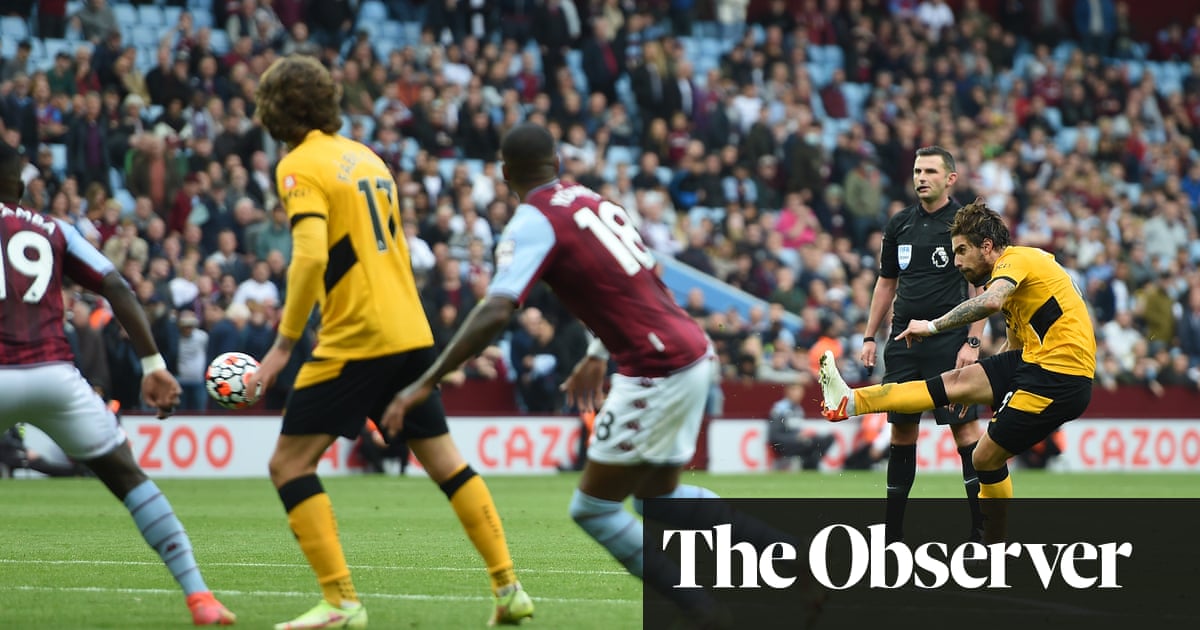 Ruben Neves’s deflected free-kick in the fifth minute of added time enabled Wolverhampton Wanderers to come back from 2-0 down to win this oscillating West Midlands derby.

The Portugal playmaker’s shot left goalkeeper Emiliano Martinez diving the wrong way after ricocheting off Matt Targett as Villa lost at home for the first time this season. Jacob Ramsey had tripped Adama Traore just outside the area but the hosts’ fall from grace had looked unlikely in the extreme as they held a two-goal lead with 10 minutes remaining.

Coasting to what appeared a deserved win through goals from Danny Ings and John McGinn, Villa fell apart after Romain Saiss made it 2-1 and then Conor Coady equalised. This was Wolves’ fourth win in five games. Yet they were second best for most of the game.

Fresh – or otherwise – from playing South American World Cup qualifiers in the early hours of Friday morning, Raul Jimenez was named on the Wolves bench, after his goal in Mexico’s win over El Salvador, whereas Emiliano Martinez and Douglas Luiz started for Villa after their appearances for Argentina and Brazil respectively.

Wolves have been the better team on paper this season but, more in keeping with the actual Premier League table, the home side dominated for much of the first half and deserved their lead early in the second.

Villa’s non-penalty expected goals beforehand would have had them in 17th place but the chances created in the first half offered a truer representation of their good form. John McGinn struck a superb left-footed shot just wide from 25 yards before Matt Cash’s superb cross invited Emiliano Buendia to clip a neat volley just wide of the near post.

Growing in confidence, Villa looked increasingly likely to score. Jose Sa, the Wolves goalkeeper, had to make a brilliant save as Danny Ings, sent in by Buendia’s cute diagonal pass, shot from the edge of the area.

Luiz and Cash crashed shots over the bar but Wolves regained a foothold in the game in the 15 minutes before half-time. Adama Traore, the former Villa winger, beat four players in an amazing burst through the middle before striking his shot too close to Martinez, allowing the Villa keeper to save.

Before this game, Wolves were in the top four according to expected goals, but Traore’s finishing continues to fall short of his occasionally brilliant approach play.

Wolves kept Villa waiting at the start of the second half and when they did emerge, they were still behind the pace. Dean Smith’s team ripped into them with a renewed energy and gained their due reward within three minutes.

Cash played the ball down the right for McGinn to hold off Romain Saiss with some ease and then turn outside onto his right foot to cross for Ings to arrive late and head home his third goal of the season. After a run of five Premier League games without a win, that was the former Southampton striker’s fourth goal in his last five appearances against these opponents.

McGinn continues to be the heartbeat of this Villa side and midway through the second half he appeared to have sealed the victory. Joao Moutinho uncharacteristically gave the ball away to Ollie Watkins and when his shot rebounded, McGinn’s left-footed shot deflected heavily off Ruben Neves to leave Sa wrong-footed.

Leander Dendoncker thundered a header against the bar and when Traore collected possession, he played a superb cross over for Dendoncker to sidefoot across goal for the captain to score and send the adjacent Wolves following into unlikely paroxysms of glee. And better was still to come as Neves won it at the death.