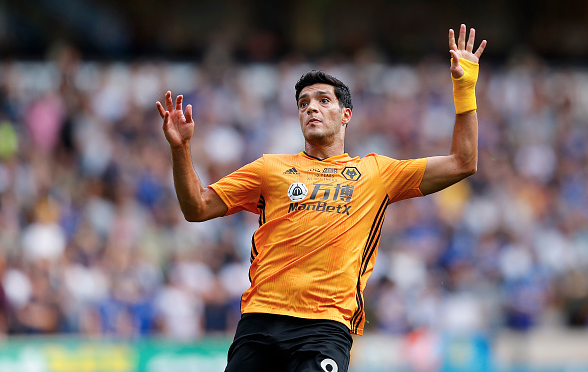 Wolverhampton Wanderers striker Raul Jimenez has revealed he remembers nothing about his horror injury that kept him on the sidelines for nine months.

The Mexican striker underwent emergency surgery for a traumatic brain injury and skull fracture in November last year after a clash of heads with Arsenal defender David Luiz.

It left the striker spending more than a week in hospital recovering before an arduous and painstaking return to fitness.

He’s since returned for Wolves wearing a special headband to protect his skull, with the player and doctors admitting it was a miracle he is still alive, never mind playing football in the Premier League.

The incident was a traumatic one for anyone who witnessed it, with the Wolves striker left unconscious on the pitch before being rushed to hospital in an ambulance after a lengthy pause in play.

Few who witnessed it will forget in a hurry, but Jimenez has revealed he actually cannot remember much of what happened to him.

“I’ve seen it (the play) several times. I asked the video people and the social media people at the club if they had different shots of the play,” he told W Radio, relayed by Medio Tempo.

“I don’t remember anything; I remember that we arrived at the stadium, that I went out to see the pitch, I went into the dressing room to change and then the lights went out.

“I don’t remember when the match started, nor the corner kick or the blow.

“I have memories of things I did in the hospital, that they brought me my food, that they stopped me from walking, but it’s not much either.”

Following the incident, some of the blame for the injury was placed on Arsenal’s David Luiz and his actions beforehand.

It was the Brazilian defender who clashed into Jimenez and caused the injury, with some believing he was reckless in the way he went about the challenge.

Replays of the incident showed him going into the header with his eyes closed, an action which resulted in the sickening clash of heads.

At the time, he was allowed to play on in the game before being withdrawn at half time, with critics focusing on him afterwards.

Jimenez doesn’t believe that’s fair, though, and has moved to exonerate the former Arsenal man of any blame for the accident.

“One of their players goes to the front post and passes in front of me,” he added.

“If I didn’t take that step, I wouldn’t jump backwards, and I would have jumped in front of him.

“Jumping backwards, he caught me loose. I take 100% of the blame off David Luiz; he was going with the intention of heading the ball; unfortunately, it was on my head.”