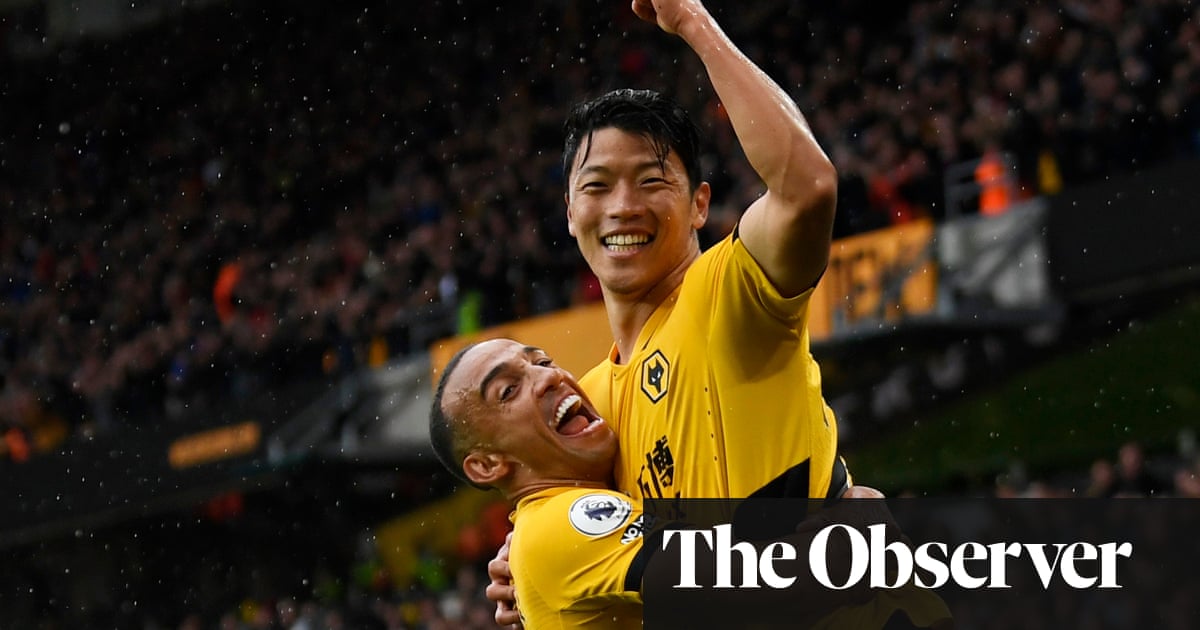 Wolves might have to consider bringing their fanzine A Load of Bull out of retirement at this rate. There was a standing ovation for Hwang Hee-chan the South Korean striker nicknamed the Bull, as he was withdrawn in stoppage time after scoring the two goals that enabled Bruno Lage’s team to win for the third time in four games.

So that’s only 303 goals for the energetic striker on loan from RB Leipzig to go before he catches up with Steve Bull, the club’s record goalscorer, but this has been a significant start to his career at Molineux.

Newcastle, who had equalised through Jeff Hendrick, have now failed to win in their opening seven games although they dominated for much of the final half hour when Allan Saint-Maximin threatened to create.

Perhaps the half-time scoreline was predictable, as these teams had drawn their five previous meetings 1-1, although to be fair Wolves scoring in the first half was a surprise. They became the last Premier League side to score before half-time when Hwang netted in the 20th minute.

Wolves, encouraged by successive away wins if not by the intervening home defeat by Brentford, had been marginally the better side when Raúl Jiménez again dropped off into the hole and played a perfectly paced pass for Hwang, sprinting across from his left flank, to run into the inside-right channel.

The South Korean had got goalside of Ciaran Clark but still had plenty to do as he slid the ball adroitly past Karl Darlow into the far bottom corner for his second goal since signing on loan from RB Leipzig.

Joâo Moutinho had a rasping long-range shot well saved by Darlow as Wolves looked to capitalise on Newcastle’s diffidence. When Joe Willock, recovered from a toe injury, had to be replaced 10 minutes before half-time, home hopes raised further.

Instead his replacement Hendrick scored to level the game; but only after Francisco Trincão had missed a golden chance and then contributed to Newcastle getting up the pitch. It was a minute or so to forget for the Portuguese winger.

Hwang, released by Ruben Neves, did superbly to progress down the left channel and even better to cross low behind Jiménez for Trincão who, coming in on his favoured left foot, blasted his shot against the underside of the crossbar.

Instead of 2-0 it was within 73 seconds 1-1. Trincao was dispossessed by Sean Longstaff in the left-half position and when Saint-Maximin started running at Wolves, the defence backed off. The Newcastle forward, playing as a lone front man after his superb recent form, cleverly slipped the ball in behind Max Kilman and José Sá saved bravely at Joelinton’s feet.

The Wolves goalkeeper appeared to have hurt his shoulder but his teammates had opportunities to clear before Javier Manquillo nicked the ball away from Moutinho to feed Hendrick, 20 yards out. The Ireland midfielder drilled the ball into the left bottom corner, cleverly wrong-footing Sá as the Portuguese tried to run back to cover his goal.

Bruno Lage, the Wolves head coach, was booked for remonstrating over the goal, but it was not a head injury so the play did not have to be stopped. Five minutes into the second half, Sá made a brilliant one-handed pointblank save from Saint-Maximin, who had made or scored a goal in his four previous games for the first time in his career. That looked pivotal as Wolves regained the lead through an increasingly promising combination.

As Jiménez skilfully bludgeoned his way out from the centre circle with the ball, Hwang repeated his run from one flank to the other to receive the ideal pass from his strike partner down the inside-left channel from where he duplicated his first-half finish, this time with his left foot.