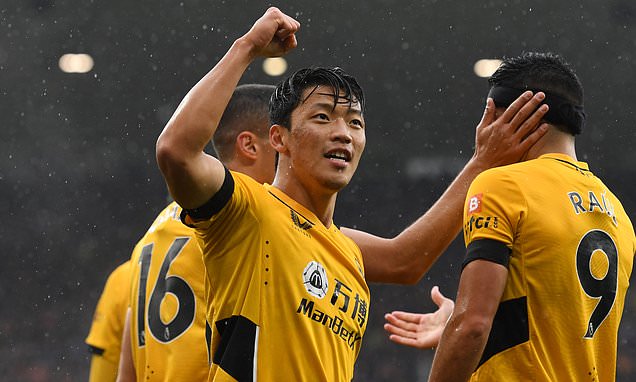 Hwang scored in each half to ensure Wolves edged a chaotic contest between two flawed teams, after Newcastle substitute Jeff Hendrick had equalised in controversial fashion shortly before the interval.

Bruce has been under pressure for virtually his entire reign at St James’ Park and an opening sequence of three points from seven matches will improve supporters’ spirits.

Hee-chan was in fine form, scoring either side of half-time after assists by Raul Jimenez

They should have taken the lead early in the second half when Allan Saint-Maximin missed a great chance, though Wolves will point to Francisco Trincao hitting the underside of the bar from eight yards when it looked easier to score.

After a quiet opening 20 minutes, Wolves took the lead when Raul Jimenez wriggled away from Sean Longstaff and played a clever pass for Hwang, who produced an excellent finish from a tight angle – Wolves’ first league goal at Molineux this season.

The goal settled the home side down and their football became more fluent.

Joao Moutinho’s effort from distance was saved by Karl Darlow before Trincao wasted a glorious chance to double Wolves’ lead, five minutes before the break.

Ruben Neves found Hwang with an excellent ball from deep and the South Korean’s low cross found Trincao unmarked at the far post. With the whole goal to aim at, Trincao opted for power and saw his shot rebound off the underside of the crossbar.

Moments earlier, Hendrick had replaced the injured Joe Willock and barely a minute after Trincao’s miss, Hendrick drew his side level.

Allan Saint-Maximin slipped Joelinton through and Sa did well to reach the ball first, taking a blow to the body in the process.

When Wolves failed to clear, Sa was still out of position and Hendrick drove the ball past him from 25 yards.

As Newcastle celebrated, Lage leapt about in fury on the touchline, believing the game should have been stopped after Joelinton and Sa had collided.

The Wolves boss was booked for his protests and when the teams walked off for half-time, referee Scott had a long conversation with Sa, who was still extremely disappointed at the decision.

Newcastle had switched from a back four to a back three when Hendricks came on and for a time Wolves struggled to come to terms with the change.

The visitors started the second half impressively and Saint-Maximin should have given them the lead in the 50th minute after more uncertain defending, he had a clear shot at goal from six yards, forcing Sa to rescue his side with a brilliant reaction save.

The home crowd had been giving the officials plenty of stick after Newcastle’s equaliser yet they were grateful to them when Wolves regained the lead.

When Jimenez took a buffeting from Longstaff just inside Newcastle’s half, Scott played advantage, giving the Mexican chance to pick out Hwang’s run with another smart pass.

As he had in the first half, Hwang delivered another merciless finish into the bottom corner, this time with his left foot.

By now the home fans were clamouring for Adama Traore, again left among the substitutes by Lage, but though the flying winger did not emerge until stoppage time, replacing the new home hero Hwang, Wolves managed to hang on for the points.