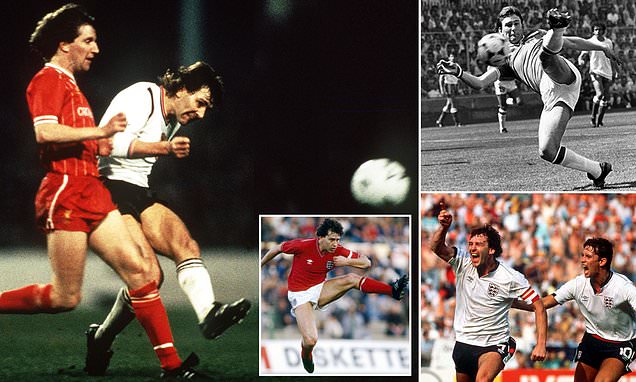 Bryan Robson has been dealt the tricky task of picking his seven favourite goals from his glittering playing career at domestic and international level.

The former Manchester United and England midfielder, described by Sir Alex Ferguson as the best captain he ever had, scored 74 times for the Old Trafford club, netted 40 at West Brom where he started and 26 for his country.

Here, Robson talks Sportsmail through his favourites and explains his reasoning behind each of them.


Probably my favourite goal. Not just because it flew in from 30 yards, it was the importance of that game to win 2-1 against a top team such as Liverpool and go through to the final against Everton.

It set up the chance of another trophy at Wembley, which we did go on to win. I was chaired off by the fans at the end and a policeman tried to help me off but he had no chance. We went into Manchester afterwards to celebrate at a really popular club called Bavardage which used to be owned by Colin Burn, a friend of George Best's. The Everton lads used to go in there, Alex Higgins the snooker player and even Ron Atkinson, our manager.

This was probably the most unusual goal I scored. I'd actually miscontrolled the ball as I slid in to shoot but ended up almost flat on the floor and in a position where I could only backheel it through the legs of Richard Money and Ray Clemence. We went on to win 2-0 with Cyrille Regis adding the second.

We had the makings of a really good team then. Ron Atkinson said years later that after he bought myself and Remi Moses from West Brom for United he would have bought about eight of that team if he had been allowed.

Sir Alex Ferguson said they were a better team than the United side I left for but I always believed I would win things at Old Trafford.

It was the BBC's goal of the season in a 2-1 friendly win and my 50th cap. I can't believe how many 20-30 yarders I scored with my right foot. Glenn Hoddle clipped it in and I hit it on the volley from the edge of the box. My concentration used to be on my timing.

I was left-footed but practised a lot at West Brom as the majority of the squad was right footed so the training routines were set up for that. I had to adjust for training sessions and it helped my technique on my other foot.

We'd hit the post twice and were 1-0 down to a Marco van Basten goal. I played a one-two with Gary Lineker and my touch going into the box gave me time to glance up and dink it over the keeper Hans van Breukelen. It was a different type of goal where I just wanted to grab control of the game and drive through their midfield and defence but Van Basten scored two more to win it for them.

They were a good side but we had our chances to put ourselves in control, we just didn’t take them. Not winning something with England was always a bitter disappointment because we had some good sides in the 80s particularly and 1990.

I love this goal because it involved everything about being a midfielder: winning a tackle, dribbling past two players, doing a Cruyff turn, laying the ball off then stamina got me ahead of my opponents to glance a header into the far corner off Arnold Muhren's cross.

Arnold was a lovely guy. I could have had a hat-trick in the '83 FA Cup final against Brighton when I was brought down for a penalty late on. Arnold was the penalty taker though so I gave the ball to him. He came up to me at the end rubbed my head and said ‘thanks very much Bryan’. He was always grateful for that Wembley cup final goal.

There were only around 24,000 fans at Wembley, one of the lowest attendances we’d seen, as the manager Bobby Robson had been getting a bit of criticism in the papers for previous performances.

Kenny Sansom crossed from midway in their half, Ray Wilkins headed the ball down and I twisted round to volley it in from around the penalty spot. Ray ran over and shouted: 'I can't believe you've scored another cracker with that right foot!' I caught it pretty well. It was my 10th for England.

Everyone talks about my first goal after 27 seconds but my second, the header, is a favourite. Even Eric Cantona, a proud Frenchman at that, picks this one out. It was a great cross in by Trevor Francis and the height that I got and importance of the game made it all the more satisfying.

Paul Mariner and I had to go for a drugs test afterwards but we were too dehydrated to wee. I asked the doctor for two beers to help us along so then the French lads who were called in asked for two beers too. I had mine and went for a wee but Paul couldn't manage it and he was left behind. The excitement was even too much back home because my wife Denise ended up going into labour and giving birth to our second daughter Charlotte.

I did an interview with ITV after the game and Jim Rosenthal said they’d messed it up and that I’d have to go back the next day to do it. I wasn’t happy as I’d had enough of interviews but unbeknown to me they’d sent a TV crew to the hospital to film Denise with Charlotte. Then they sat me in a room and put the video on and that was the first time I’d seen Charlotte — broadcast live on TV.

ROBBO: The Bryan Robson Story will be available on DVD, Blu Ray and digital download from November 29. Pre orders are available from Amazon, AppleTV and SkyStore.