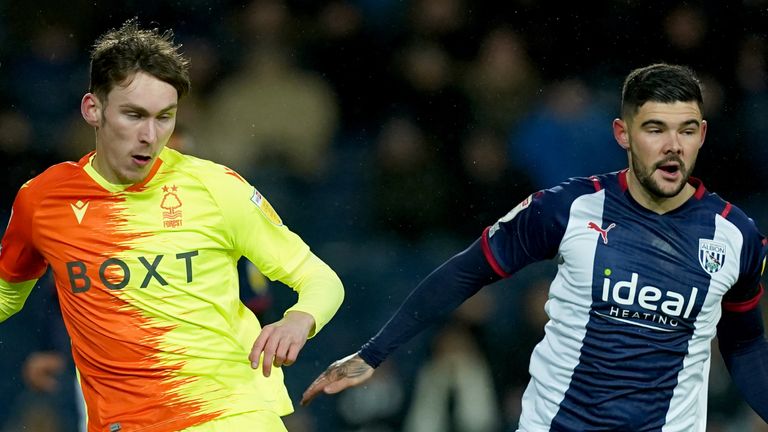 West Brom failed to make up any significant ground on front-runners Fulham and Bournemouth as they drew 0-0 against Nottingham Forest at The Hawthorns.

Valerien Ismael's men undoubtedly had the best chances, with Grady Diangana, Darnell Furlong and Jordan Hugill threatening on a sodden playing surface, but for the third game in succession they could not find a way to score.

To add to their Friday night misery, Baggies midfielder Jayson Molumby was dismissed for a second yellow card 20 minutes from time after a late challenge on Joe Lolley.

While Forest have now lost just once in 13 games under Steve Cooper, West Brom's winless run extends to four games. They stay in third, seven points outside the top two, while Cooper's men climb above Preston in 13th.

Luck simply had not been on West Brom's side since Championship football restarted after the international break. A 1-0 defeat to Huddersfield on November 20 had preceded a stalemate away at Blackpool three days later and, across those two games, they had failed to score, despite registering 45 attempts.

It was a similar story back on home soil, too. Forest sat deep and frustrated their hosts, but the chances still flowed and the first of note came when the strong arm of visiting goalkeeper Brice Samba kept out a low shot from Diangana, which had picked up pace on the slick surface.

With half an hour gone, the Baggies should have been ahead. Karlan Grant got the better of Joe Worrall over on the far side of the pitch and pulled the ball back for Furlong, who lifted a shot over from 12 yards out.

After the break, Grant weaved his way into the box and fired over from an angle, but it was the visitors who grew into the game and Brennan Johnson forced a great save from Sam Johnstone after his shot hit Matt Clarke's studs and looped up towards goal.

West Brom's chances then took a hit as they were reduced to 10 men when Molumby collected a second booking, yet they continued to press for a winner and almost got it when Hugill was teed up by Clarke in the box, though he rushed his shot and blazed over.

Within seconds Forest could have won it, too, but Lewis Grabban couldn't quite stretch far enough to turn home Worrall's neat cross as the game ended without a winner.

Man of the match - Joe Worrall

"There's only one man it could be, for me. Joe Worrall defended immensely, blocked everything, was all over the pitch and almost set up Lewis Grabban at the end. He was excellent."

Both sides are next in action on Saturday, December 4. West Brom travel to Coventry at 12.30 - live on Sky Sports Football - while Nottingham Forest host Peterborough at 3pm.