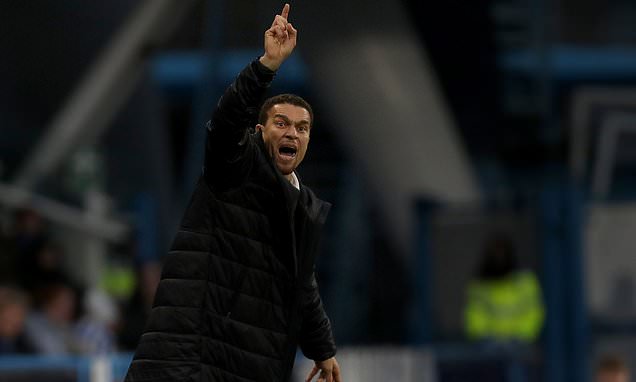 The Terriers’ striker slid in from close range to leave Valérien Ismaël’s side eight points off the coveted automatic promotion places.

Captain Jake Livermore was also shown a straight red card on a miserable afternoon for the visitors.


It was the Albion’s high defensive line that proved their downfall as the Terriers ripped them apart early on.

Scott High threaded a clever ball to free Danny Ward who rolled the ball across goal to allow Sinani a tap-in after just six minutes.

Harry Toffolo then fizzed a left-footer narrowly wide as the home side sensed blood, and but for a heavy touch from Sorba Thomas they would have doubled their lead.

Albion were caught flat directly from goalkeeper Lee Nicholls’ clearance, and Sorba Thomas raced clear only for a heavy touch to see the opportunity disappear.

Albion settled into the game midway through the half, with Matt Phillips blazing well over and the hapless Cédric Kipré booked for a late tackle on Sinani

Matt Clarke wasted a great opportunity to equalise when he headed straight at Kipré and then saw his follow up shot blocked by Matty Pearson.

As the pressure built on the Town goal Bartley again fired just wide from a corner, and then climbed highest of to meet Conor Townsend’s cross but his header was straight at Nicholls.

Yet as the visitors pressed, so the gaps began to open up and Ward should have sealed the win for Town midway through the second half.

Goalscorer Sinani turned provider, squaring for Ward to tap wide of a gaping goal from 10 yards.

Sub Fraser Richardson then scampered through but again Bartley cleared the danger, before the Baggies’ hopes suffered a further setback.

Skipper Livermore, who endured a frustrating afternoon, was shown a straight red card for a high foot and the visitors were down to ten.

Matt Clarke had one last chance but his diving header flashed inches wide and Huddersfield held on for another home win.