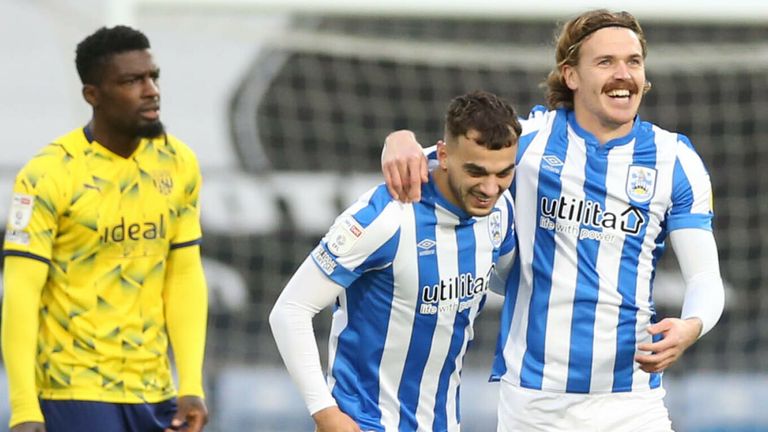 Huddersfield struck a huge blow in the Championship promotion race as Danel Sinani struck the only goal of the game to beat West Brom 1-0 at the John Smith's Stadium.

The Town striker turned in Danny Ward's pass just six minutes in, to hand the Baggies a fourth straight away defeat on a miserable afternoon in which their skipper Jake Livermore was also shown a straight red card for violent conduct.

The Terriers exploited West Brom's high defensive line, and Sinani was the chief beneficiary. Scott High found Ward in space and his square ball was slid home by Sinani.

Harry Toffolo was a lively presence down the Town left and he fired a left-foot shot just wide. West Brown were then caught flat straight from a long ball, and but for a heavy touch from Sorba Thomas Huddersfield would have doubled their lead.

Goalkeeper Lee Nicholls blasted a long clearance, and Thomas raced clear only for a poor touch to see the opportunity disappear.

Defender Kyle Bartley was West Brom's most likely scorer, and the defender had a succession of efforts scrambled clear.

Albion enjoyed a good spell midway through the half, with Matt Phillips turning and firing well over.

Matt Clarke wasted a great chance to equalise when he headed straight at Cedric Kipre and then saw his follow-up shot blocked on the line by Matty Pearson.

As the visitors pressed for an equaliser before the break Bartley again fired just wide from a corner, and then climbed highest to meet Conor Townsend's cross but his header was straight at Nicholls.

It was a much improved second-half display from Albion but the gaps at the back began to open up.

Ward should have sealed the win for Town midway through the second half after another slick move. Goalscorer Sinani this time turned provider, squaring for Ward to tap wide of a gaping goal from 10 yards.

Ward was immediately replaced by Fraser Richardson who scampered through but again Bartley cleared the danger, before the Baggies' hopes suffered a terminal setback.

Livermore was shown a straight red card for violent conduct after raising his foot in a challenge. Down to 10 men, Albion had one last go and Clarke saw his diving header flash inches wide.

Impressive Huddersfield held on for another home win, but Albion's away form remains a huge concern in their promotion push.