Fulham 3-0 West Brom: Mitrovic nets a hat-trick to down the Baggies
Daily Mail 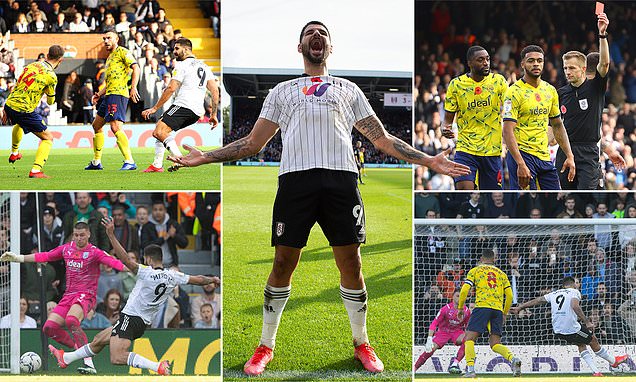 Aleksandar Mitrovic struck a hat-trick as Fulham maintained the pressure on Championship leaders Bournemouth and West Brom were undone by a contentious key decision and a first half blunder by Robert Snodgrass in game that ended with both teams reduced to ten men.

Mitrovic has now struck 18 league goals this season but he was helped on the way by a controversial first half penalty decision and Snodgrass’s misplaced back pass.

That put Fulham in control at half-tome and the 70th minute dismissal of Albion wing-back Darnell Furlong - another dubious call, in the eyes of the Albion players - killed off any hope the visitors may have had of staging a comeback.

Mitrovic grabed his third in the 82nd minute to kill off the game, three minutes before Tosin Adarabioyo was dismissed for a poor challenge on Grady Diangana.

Fulham were given a significant helping hand when they took made the 20th minute breakthrough.

Bartley matched the forward’s run and appeared to make contact with the ball before the Fulham forward tumbled to the ground.

West Brom responded positively and were building a period of sustained pressure with Matt Clarke and Bartley both forcing Fulham keeper Marek Rodak into action with headers from set-pieces.

The last thing the visitors needed, then, was to gift Silva’s side the second goal that ensured Fulham reached half-time in control of the game.

Snodgrass was the guilty culprit, playing a back pass straight into the path of Mitrovic who poked the ball past Johnstone.

Then, in the final 10 minutes, Mitrovic got his hat-trick – his second in six league games

West Brom almost forced their way back into the game two minutes into the second half when Jordan Hugill just failed to connect with Conor Townsend’s cross.

Then midway through the second period Jake Livermore somehow directed his effort over the bar from three yards out.

But ay hope Albion had of forcing their way back into the game disappeared when Furlong was sent off for a challenge on Harry Wilson in the 70th minute as he attempted to cut out De Cordova-Reid’s through ball.

MItrovic then added his late third after being set up by Harry Wilson.

Shortly before Mitrovic's third, Darnell Furlong (right) was sent off for a last-ditch tackle