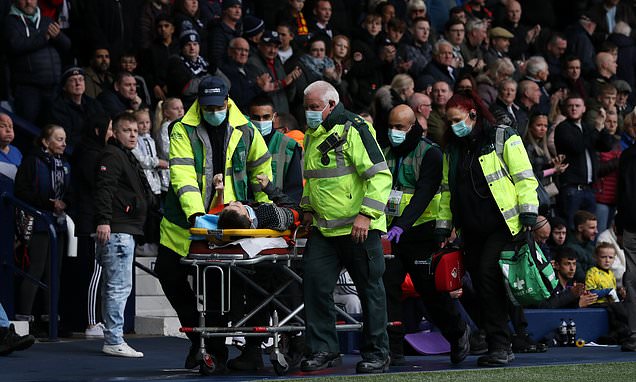 Kick-off was delayed by 15 minutes in West Brom's Championship fixture against Bristol City this afternoon after a medical emergency involving a supporter.

The concerning development was confirmed by the club in a social media post ahead of the game getting underway - and comes in light of the incident that saw a fan suffer a cardiac arrest at Newcastle last weekend.

'Owing to a medical emergency involving a fan inside the stadium, kick-off has been delayed by 15 minutes,' West Brom's tweet read. 'Our thoughts and prayers are with the supporter. We're all with you.'


A medical team was required to help the stricken supporter, who was then placed onto a stretcher, pictures from inside The Hawthorns have revealed.

Owing to a medical emergency involving a fan inside the stadium, kick-off has been delayed by 15 minutes.

Our thoughts and prayers are with the supporter. We're all with you 💙

Bristol City have also shared their support, saying: 'The thoughts of Bristol City are with those affected.'

Thankfully, there were positive signs when the fan was taken away, with supporters claiming they were seen 'smiling and clapping' while they were 'sung to'.

The match eventually started at 3:15pm, and Jordan Hugill scored shortly after to hand West Brom a dream start.

The match got underway at 3.15pm, and Jordan Hugill (right) then scored after seven minutes

Less than a week ago, an elderly Newcastle supporter collapsed during their Premier League game against Tottenham, and was revived using a defibrillator.

His identity was revealed as Alan George Smith, 80, and his family said that he is now 'full alert' and 'walking about'.

The fixture was temporarily suspended during the first half after the players and match officials were made aware of the incident.

Mr Smith's family praised his friend, Don Williamson, who was at St James' Park with him and alerted other fans, along with those on the field.

The incident comes days after Alan George Smith (above), 80, had suffered a cardiac arrest

Tottenham's Sergio Reguilon and Eric Dier were also crucial in the life-saving operation, with the former asking the referee to call a halt.

A defibrillator was carried across the pitch by medical staff and into the East Stand, and Mr Smith then had CPR administered before being taken to hospital.

'We are pleased to advise that Alan is making great progress, is now fully alert and is up and walking about,' Mr Smith's son, Paul, said via the Newcastle official website.

'He will remain in hospital over the next few days while further tests are carried out.'

'I don’t know how to do CPR but I think I did the right thing,' Reguilon told Sportsmail. 'Dier was incredible and it was the right action to stop the game.

'In the dressing room, all I could think about was the man.'

A cardiac arrest is when a person's heart suddenly stops pumping blood around their body.

It causes the brain to be starved of oxygen and the person will collapse suddenly and be unconscious, unresponsive and won't be breathing or breathing normally - they may make gasping noises.

Without immediate treatment the person will die. If you're with someone who's having a cardiac arrest, call 999, start CPR and use a defibrillator if there's one nearby. Follow the instructions from the 999 operator until the emergency services take over.

Starting immediate CPR is vital as it keeps blood and oxygen circulating to the brain and around the body. A defibrillator will then deliver a controlled electric shock to try and get the heart beating normally again.

For more information go to the British Heart Foundation website.