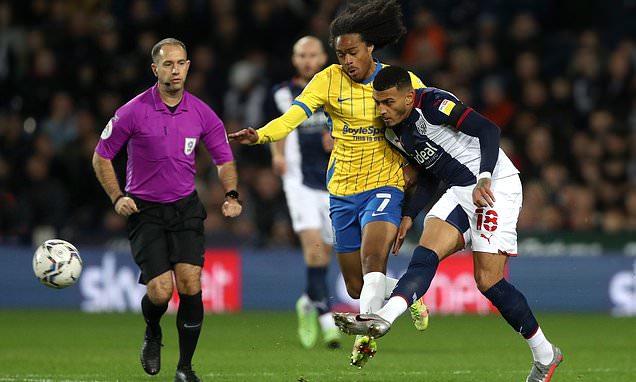 Karlan Grant's late strike took West Bromwich Albion top of the Championship but they will have to play much better than this to be still there at the end of the season.

Bournemouth can climb back to the summit if they avoid defeat at Bristol City on Saturday and even though Grant’s 75th-minute goal was enough here, Albion made hard work of it in a tough derby clash.

Birmingham are now without a goal in five games yet there were unlucky not to claim a point. Ivan Sunjic hit the bar and Scott Hogan squandered two good chances.

Birmingham boss Lee Bowyer dropped captain Harlee Dean, with Lukas Jutkiewicz taking the armband. After losing 3-0 at home to Nottingham Forest before the international break, Blues looked solid in the first half here.


West Brom had the majority of the ball but struggled to create chances. Matija Sarkic tipped a 25-yard effort from Conor Townsend over the bar and Dion Sanderson did well to block a low shot from Callum Robinson following more good work from Townsend.

Jutkiewicz took a buffeting as the visitors’ lone forward and at one point had to change his shirt. But he had his team’s best chance with a flicked header that drifted just over.

Albion took off Callum Robinson at half-time with Jordan Hugill replacing him but it did not produce an immediate improvement. Instead, it was Birmingham who created the first two clear chances as both sides continued to cancel each other out.

Substitute Jeremie Bela, on for the injured Maxime Colin, burst down the right and crossed for Scott Hogan, who mistimed his slide and guided his volley wide.

Soon afterwards Hogan was too clever for Semi Ajayi and raced into the box before setting up Sunjic, who should have done better than clip the top of the bar from 10 yards.

Earlier, the home side had been forced into another change when midfielder Alex Mowatt picked up a foot injury and was replaced by Jason Molumby. Hogan missed another opportunity with 20 minutes remaining, firing over after Albion did not clear Marc Roberts’ long throw.

And Blues were punished for those wasted chances when Grant was left unmarked following a throw-in and his low strike fizzed past Sarkic from 20 yards. Even though his side needed a goal, Bowyer decided against sending on Troy Deeney.

There was still time for Sarkic to make a superb save in stoppage time from Kyle Bartley’s close-range header but Albion still got over the line.