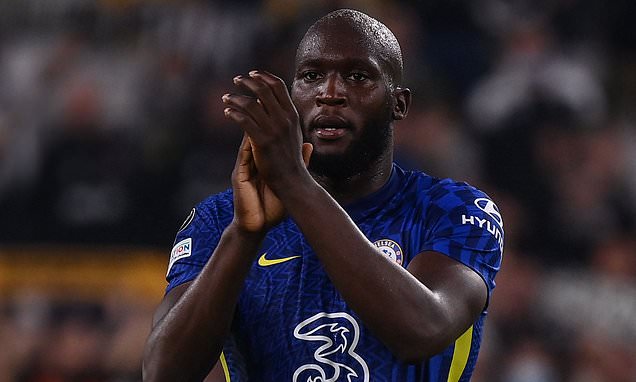 Antonio Conte has revealed he wanted to sign Romelu Lukaku at Juventus when the Belgian forward impressed on loan at West Bromwich Albion back in 2013.

Lukaku was loaned out to the Baggies by Chelsea in the 2012-13 season and finished as the Premier League's sixth-highest scorer that campaign with 17 goals, more than any other striker at his parent club that term.

The Belgian striker initially failed to make the grade at Chelsea and ended up linking up with Conte at Inter Milan in 2019, earning the Nerazzurri their first Serie A title in 11 years earlier this year, before securing a £98m move back to Stamford Bridge.

Lukaku had just finished the 2012-13 season on loan at West Brom, where he scored 17 goals

Conte, who also quit Italian champions Inter this summer and is now working as a pundit for Italian TV, admitted that his all-round forward play made him an eye-catching player when he was playing at the Hawthorns.


'Lukaku has a unique characteristic,' Conte told Sky Italia. 'That's why I really wanted him at Inter. I had been following him for a while, I even asked Juventus about him when he was playing for West Bromwich Albion.

'It's difficult to find a player who can be such a good focal point in the area and, at the same thing, generate pace from deep like him. That's his characteristic, it's the same that I see in Haaland.'

Lukaku and Conte had a good relationship at the San Siro between 2019 and 2021, with the Belgian striker claiming the Italian manager 'changed him as a man' during his two seasons in Italy.

But Lukaku joined Conte out of the exit door to complete a return to boyhood club Chelsea, with the striker scoring four goals in eight appearances so far this season.

Chelsea's 1-0 loss to Juventus on Wednesday night means Lukaku has now gone four matches without a goal and Conte believes Thomas Tuchel's Blues still do not know how to use him yet.

'I think he can still do better, above all with his technique,' Conte added. 'He is already at a very high level, but a player must keep improving until the day he retires.

'During the game, there are moments when Lukaku needs to be turned on, but other than that he is one of the toughest forwards to play against, because he can do damage in any area of the pitch.

'If you have a centre-forward like that, you need to use him and I don't think Chelsea have quite figured out how to use him yet.

'Last season, they didn't have a proper centre-forward, so they rotated positions, whereas Romelu is a real reference point in attack. If they can figure out how to use Lukaku, then Chelsea can become the team to beat in the Champions League this season.'

Lukaku nearly found the net for the first time in over a fortnight in Turin against Juventus, but fired over the bar late on when found inside the penalty area.

Conte claimed Juventus, who he managed between 2011 and 2014, managed to give the Belgian and his fellow Chelsea attackers very little space defensively during the slender European win.

The Italian manager added: 'It's an important victory because it came with a strategy: Juventus wanted to play that type of game.

'They gave away little in terms of spaces, defended in their own half and then took advantage of counter attacks through Chiesa, who was lethal.

'They have taken three points, first place in the group and victory against the champions of Europe, but they've also found some spirit. You can talk about possession or a lack of possession but having the right spirit is important.

'Lukaku had that chance at the end, but Chelsea could have done more. Juventus risked very little but still exerted themselves even though it's difficult playing without the ball. That's proof of defensive resilience.'