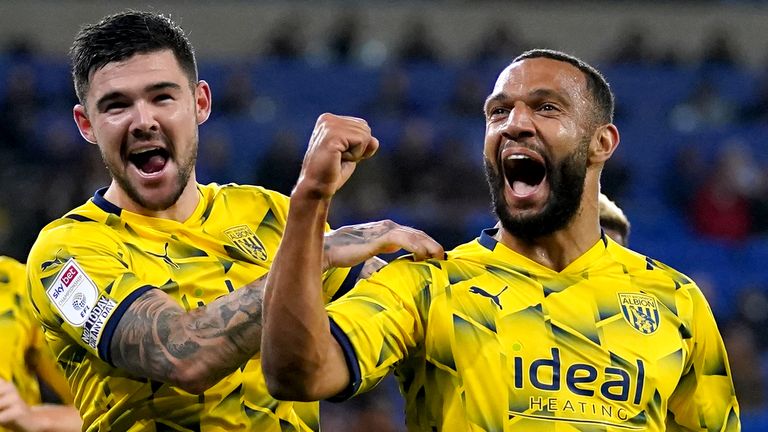 West Brom moved to the top of the Sky Bet Championship with a resounding 4-0 win at Cardiff that turned the heat up on under-fire Bluebirds boss Mick McCarthy.

Karlan Grant's early effort, a Curtis Nelson own goal, an Alex Mowatt screamer and Matt Phillips' icing on the cake extended the visitors' unbeaten start and underlined the gulf between the two sides.

This was Cardiff's sixth defeat in seven games in all competitions and, coming after Saturday's 5-1 defeat at Blackburn, McCarthy had to endure chants of 'You're getting sacked in the morning' from both sets of supporters.

West Brom had not won in the Welsh capital since October 1974, but that 47-year wait came to an end as Albion leapfrogged inactive Bournemouth at the top of the table.

Aden Flint headed wide from a long Will Vaulks throw in the opening exchanges but Cardiff were behind after five minutes through Grant's third goal in two games.

Adam Reach found Grant who shifted the ball onto his right foot to arrow a superb shot past Dillon Phillips from 25 yards.

Cardiff's failure to engage West Brom forwards on the edge of their own penalty area almost cost them again after 26 minutes.

The home fans were showing signs of restlessness before the West Brom goal came under threat for the first time 10 minutes before the interval.

Vaulks' deep cross was met by the head of Leandro Bacuna who guided it over goalkeeper Sam Johnstone.

West Brom's Alex Mowatt has an incredible left foot. Take a look at this hit!

But the masked Darnell Furlong showed there was nothing wrong with his vision by completing a superb headed goal-line clearance.

Robinson's tame effort was easily gathered by Phillips before James Collins spurned an inviting opportunity at the other end.

Collins could only send his shot into the ground and it ballooned over the crossbar off the back of team-mate Ryan Giles, stretching Cardiff's first-half drought in Championship games this season to 10.

At least Cardiff were showing more attacking intent than of late and Collins beat Kyle Bartley to a bouncing ball after the restart to set up another promising situation.

Giles' centre was asking to be finished but Jake Livermore retreated to cut out the danger.

Grant burst down the left and his cross was diverted by Phillips onto Flint and into the path of Robinson.

The Republic of Ireland striker was off balance and his effort flew across goal for Nelson to clumsily find his own net via a post.

Albion hammered home their superiority in the final 15 minutes as Cardiff fell apart.

Mowatt smashed home a half-volley from 25 yards and substitute Phillips was given the freedom of Cardiff to make it nine goals past the Bluebirds in two games.