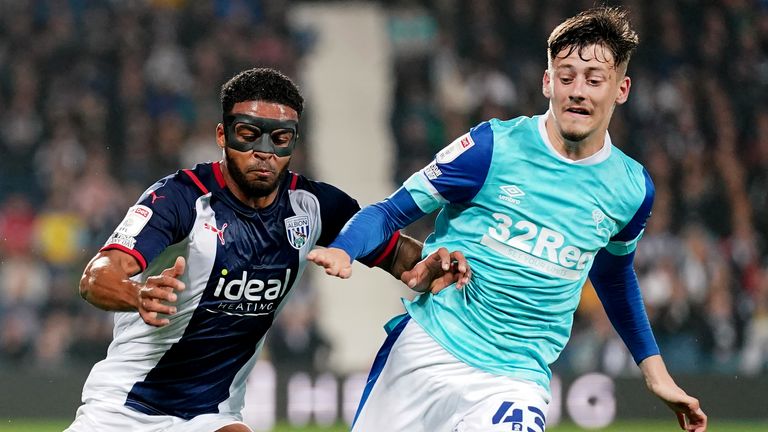 Derby somehow emerged with a point after denying dominant West Brom in a 0-0 draw at The Hawthorns.

It was Roos who preserved Derby's clean sheet at the death when he blocked Darnell Furlong's diving header.

Seyi Ajayi's shot was hacked off the line by former Albion centre-back Curtis Davies after Alex Mowatt found Grady Diangana, got the return and crossed for Karlan Grant to slice his shot to Ajayi.

Diangana's volley was deflected wide after Furlong headed back Mowatt's deep cross before Mowatt's corner was punched away by goalkeeper Roos, who appeared to be targeted by the home side from their corners.

Furlong was in the thick of things and his header was deflected over the bar from Callum Robinson's cross before his curling free-kick was pushed away by Roos diving to his left.

Robinson had Roos stretching to hold a hooked shot from Adam Reach's cross as Albion continued to push for the opening goal.

In an effort to break the deadlock, Albion head coach Valerien Ismael made a double substitution at half-time, bringing on Jordan Hugill and Matt Phillips for Grant and Robinson.

Hugill had the first opening following the restart when his rising, angled drive sailed high and wide.

Reach then created headed half-chances for Ajayi and Furlong but both efforts floated off target.

Albion missed two excellent opportunities in the 58th minute. Diangana fired too close to Roos from a one-on-one then Furlong chipped over from the rebound.

The pressure from the home side was relentless and Phillips, sliding in, failed to turn in Diangana's cross at the far post before Roos stuck out his right leg to block Phillips's sidefooted effort from just inside the box.

Roos denied West Brom what appeared to be a certain goal in the second minute of time added on when he blocked Furlong's diving header from Phillips's cross.