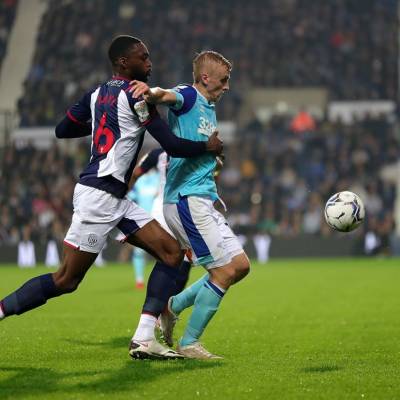 Derby County earned a hard-earned point against league leaders West Bromwich Albion as they ground out a goalless draw at the Hawthorns.

The Rams had to soak up a lot of pressure during the stalemate but the defence stood firm to hold on to a useful point.

West Brom had good chances to win the game, notably from Semi Ajayi in the first half who was denied on the line by Curtis Davies, whilst in the second half, Darnell Furlong shot over the crossbar with the goal at his mercy.

Derby did have one chance as Jason Knight saw a shot blocked early in the second half but it was the back six who earned all the plaudits for their resolute defending to earn Derby a valuable point.

Manager Wayne Rooney made three changes to the side which faced Birmingham City on Friday night as Jason Knight, who made a late cameo against the Blues, made his first start of the season, whilst second year youth scholar Dylan Williams made his first professional league start for the Rams.

And Williams, who celebrated his 18th birthday yesterday, steadily grew into the half and showed some neat touches throughout the half.

But the Rams almost found themselves behind on nine minutes through a well-worked corner routine from the hosts.

Alex Mowatt played a one-two with Callum Robinson before firing low across the box. An outstretched leg converted the ball into the path of central defender Semi Ajayi but his effort was blocked on the line by Curtis Davies.

It was a fortunate escape for the Rams whose game plan worked in the opening stages of the game as they frustrated their opponents. On the counter attack, Louie Sibley saw a shot blocked from 25 yards midway through the half.

West Brom started to stamp their authority on the fixture soon after, however, as they piled pressure on the Rams’ goal, however, Derby stood firm.

After referee Kevin Friend waved away two penalty claims from the home side, a succession of corners tested the Rams’ backline. Mowatt’s delivery was on the money, but a combination of good goalkeeping by Kelle Roos and good defending by Curtis Davies and Phil Jagielka denied the Baggies.

Roos had to be alert shortly afterwards as he palmed away Darnell Furlong’s free kick from 25 yards and he also denied Robinson from eight yards after his deft flick was on target.

Following that spell of sustained pressure, which the Rams defended well, they grew into the half and maybe had the better of the chances.

Curtis Davies, who skipped the Rams against the Baggies, headed over from a Sibley corner, whilst Sibley and the returning Kamil Jozwiak troubled the West Brom defenders.

And the Rams felt they should have been awarded a penalty with five minutes of the half remaining. Jozwiak and Sibley combined as the latter took aim from the edge of the area. The ball appeared to strike the arm of Mowatt, however, Friend signalled no penalty.

West Brom made changes at half time and brought on Matt Phillips and Jordan Hugill to add an extra physical presence to their attack.

But the first chance of the second half fell the way of the Rams as a crisp effort from Knight from the edge of the box had to be diverted behind for a corner.

The home side created half chances of their own as Furlong twice headed wide, whilst he would be presented with the game’s best chance just before the hour mark.

Grady Diangana exploited space down the left-hand side and raced through on goal. Roos was out quickly to deny the striker but the ball fell into the path of Furlong. He shifted the ball on to his favoured right foot but leaned back too much and blasted over the crossbar with the goal gaping.

The Rams’ resilience was showing as they worked hard to keep their visitors at bay. And they were throwing bodies on the line, too. A neat move five minutes later saw Phillips presented with a shooting opportunity, but Lee Buchanan and skipper Davies flung themselves in front of the ball to deny the forward from 12 yards.

West Brom were probing. Mowatt shot wide from inside the ball as the ball sat up invitingly for the midfielder, and on 70 minutes, Diangana’s low cross only needed a tap in, but the ball was ahead of Phillips who was diving in at the back post as the Rams rode their luck.

With the home side throwing everybody forward in a bid to get something out of the game, the Rams had to hold firm, and Roos more than played his part.

He denied substitute Phillips with his feet, whilst he saved from Kyle Bartley after the defender headed towards goal with only seven minutes remaining.

And in the final minute of normal time, Derby almost scored the elusive goal. Good play from Williams on the left saw him find Lawrence. The forward found Byrne who crossed into the centre but it was just ahead of the onrushing Jack Stretton.

The fourth official announced five minutes of additional time to be played, and Roos would prove to be the hero as he denied Furlong’s header from close range. The goalkeeper stood up strong to parry his fierce header away.

And it would prove to be the last action of the game as the Rams saw the game out professionally and earn a good point at the Hawthorns.