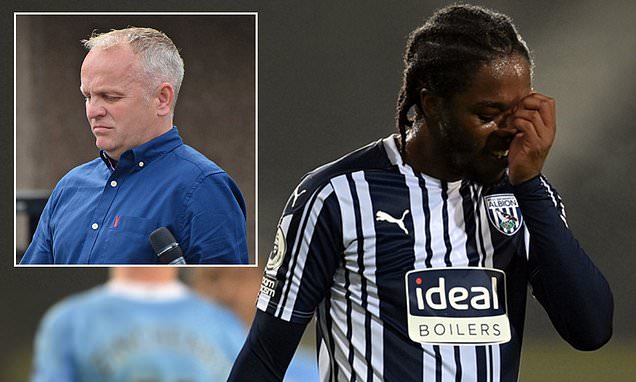 West Brom have issued a lifetime ban to a 50-year-old man convicted by West Midlands Police of racially abusing Romaine Sawyers on WhatsApp.

Simon Silwood posted on a sarcastic WhatsApp group titled 'Romaine Sawyers - Ballon d'Or' about the 29-year-old midfielder, saying he should win the 'baboon d'Or' following a 5-0 loss to Manchester City on January 26.

Silwood claims he meant to write 'buffoon d'Or', but misspelt to 'bafoon' before his device autocorrected.

But Silwood, from the town of Kingswinford, has been found guilty of an offence under the Malicious Communications Act, following the conclusion of a trial at Walsall Magistrates' Court.

In a statement provided to the court Sawyers, currently on loan at Stoke City, said: 'As I read it, I felt numb and did not know what to say. Having seen [the word] I assumed it was referring to the colour of my skin.'

'The word has left me feeling harassed, alarmed and distressed and I find the message to be racist. The whole incident has left me extremely upset.'

West Brom have issued a lifetime ban to Simon Silwood (R), who was found guilty of racially abusing Romaine Sawyers in January (L)

Sawyers, 29, said he felt 'numb' when he read the WhatsApp message sent by Silwood, 50

A spokesperson for West Bromwich Albion Football Club said: 'The club welcomes the guilty verdict and has issued a lifetime ban to the person in question.

'West Bromwich Albion has a proud history of fighting all forms of discrimination and our message to supporters is clear; racism is wholly unacceptable and will not be tolerated by the club.

'We will continue to work with West Midlands Police to ensure all instances of racism, either at The Hawthorns or online, are reported. Anyone who is found guilty of such an offence will be banned from the club for life.

'Albion will continue to campaign for social media companies to take greater responsibility for the online hate published on their platforms.'

Silwood is set to be sentenced on 30 September.

Sawyers was one of three Albion players confirmed to have been racially abused last season, with Callum Robinson and another star who did not wish to be named also targeted online, then-boss Sam Allardyce said in April.

Several Premier League players have been subjected to racial abuse online in recent months and English football has been piling pressure on social media firms to do more to tackle the problem.

The ex-player, turned pundit, has told MPs he has to explain to his children why he has received banana and monkey emojis on his social media accounts, with abusers acting with impunity.

Ferdinand was giving evidence to a Parliamentary committee examining the Draft Online Harms Bill, which is designed to force big tech firms to take responsibility.

He, the FA and Kick It Out said there was little sign that social media companies were willing to act on racism and the law was much needed, albeit with some amendments to the current proposals.

'It baffles me, it is disheartening,' Ferdinand said. 'The data is telling us [racism] is here and it is back.

'We saw in the Euros when three black players missed penalties… the first thing I thought was let's see what happens on social media. I expected what happened to happen. That is the disappointing thing.'