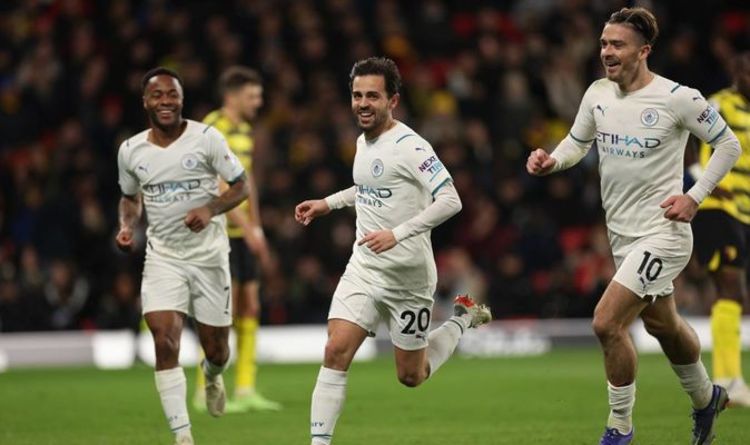 MANCHESTER CITY climbed to the top of the Premier League table as they beat Watford 3-1 at Vicarage Road, and with the Champions now in control of their own destiny, it hands Liverpool and Chelsea with an almighty challenge.

Chelsea and Liverpool face their toughest ever Premier League title race yet as Manchester City climbed to the top of the table after coasting past Watford during a 3-1 win at Vicarage Road.

It took just four minutes for Pep Guardiola's side to get off the mark as Raheem Sterling kept up his incredible record against Watford, and Bernardo Silva continued his excellent start to the season with a second on the half hour mark.

Silva grabbed his second 15 minutes into the second half with a beautiful effort bent into the top left corner, but Watford did pull one back at substitute Cucho Hernandez bundled in a consolation past Ederson.

It may have been a routine win for the Premier League champions, but Chelsea's slip up against West Ham now hands City with complete control, and they look ready to step it up a gear.

In what looks set to be one of the greatest ever Premier League title races, there was another twist to the ever changing tale as West Ham stunned Chelsea to win 3-2 at the London Stadium, opening the door for Liverpool and City.

A Chelsea side that were yet to concede more than one goal in any of their league matches this season, were humbled by West Ham as David Moyes' side came back from behind twice before stealing a late winner.

Chelsea dropped from first to third in a matter of hours, as Liverpool's last-gasp winner against Wolves handed them the bragging rights for a matter of minutes, before Sterling took the lead for City shortly after kick-off.

With City now in cruise control, their squad depth and recent experience in dealing with the pressure of top spot will be worrying both Chelsea and Liverpool, and they also face losing important stars in January as they attempt to chase the Champions.

Manchester City are favourites to grab another league title (Image: Express Sport)Pep Guardiola will be hoping to see his Premier League competitors slip up in January (Image: GETTY)