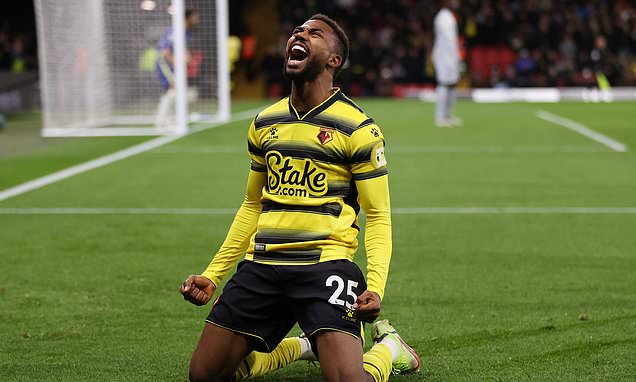 With six Premier League goals and five assists, Emmanuel Dennis is shaping up as the bargain buy of the year and a triumph for Watford’s recruitment strategy.

Dennis signed from Club Brugge for £3.6million after a season when his goals dried up and he became saddled with a bad-boy reputation as he struggled to cope with lockdown issues and personal problems including the death of his brother in a boating accident.

Twelve months earlier, when Arsenal and Napoli were among those interested, Bruges were demanding five times the fee they eventually accepted for the Nigeria international.

A bust-up with Brugge, a bad-boy tag and tragedy have defined Emmanuel Dennis's career

‘Maybe the club was too greedy,’ said Dennis, in an interview with Belgian newspaper Het Nieuwsblad in October.


Club Brugge paid just over £1m when they signed Dennis as a teenager from Zorya Luhansk in Ukraine.

He could be inconsistent but he shot to fame by scoring twice against Real Madrid at the Bernabeu in the Champions League, mimicking Cristiano Ronaldo’s trademark celebration and tormenting stalwart centre halves Sergio Ramos and Raphael Varane.

One year on, however, things turned sour when, back in the Champions League, he was dropped for a game at Borussia Dortmund as boss Philippe Clement cited a breach of discipline.

Dennis had stormed from the team bus following a row about where to sit. He boarded the wrong vehicle at a time when the team was travelling to games in two buses to comply with social distancing.

When told to get on the other bus or go, he went. And his relationship with the club did not recover.

Dennis claimed the mood towards him had changed after a prior incident when he reported back half a day late from international duty with Nigeria, having missed his plane.

He joined Cologne on loan in January but contributed little as they escaped relegation, starting only six Bundesliga games and, once again, his poor attitude was criticised by sporting director Horst Heldt.

‘A big lie,’ the 24-year-old told Het Nieuwsblad, but he does not dispute the fact his career lost its way after he failed to secure a move out of Club Brugge in the summer of 2020 and struggled to cope when stadiums were empty due to coronavirus lockdown restrictions.

‘I need an audience because I’m a showman. Without fans, football is dead. It looked like training. So last season I was really down. All the time at home with a headache, taking paracetamol. I felt lost and at the end of December I also lost my older brother. That made it worse. It was too much.’

His elder brother Popti died when his boat capsized during a race in Lagos. Dennis took these stresses with him to Cologne, and, to make matters worse, he needed painkillers for a toe problem to get through games.

Watford kept faith in his talent and are enjoying the rewards.

With the slate clean, Dennis scored on debut against Aston Villa and is flourishing under Claudio Ranieri.

It is good company to keep and, after hitting the target in successive games against Chelsea, Leicester and Manchester United, Dennis goes up against champions Manchester City on Saturday. His electric pace, energy and direct style is a good fit for Ranieri, whose survival plans will rely heavily upon Watford’s threat on the counter-attack.

The only potential snag is that Dennis might be dazzling his way back into the Nigeria squad ahead of the Africa Cup of Nations, starting next month with Watford already expecting to lose William Troost-Ekong, Imran Louza, Adam Masina and, if fit after a knee injury, Ismaila Sarr.