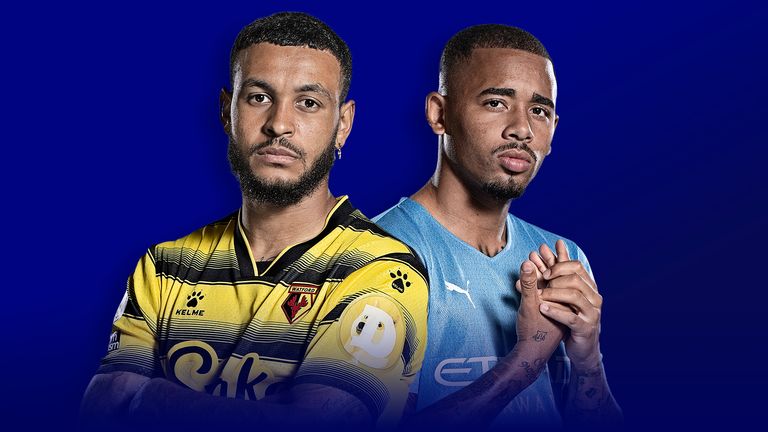 Team news, stats and prediction ahead of Watford vs Man City in the Premier League on Saturday; kick-off 5.30pm.

Watford's mounting casualty list grew on Wednesday night with Adam Masina also facing time on the sidelines ahead of the visit of Manchester City on Saturday.

Masina was forced off in the first half against Chelsea and joins an injury list which already includes Ismaila Sarr, Ben Foster and Nicolas Nkoulou, who are all sidelined until January.

Image: Adam Masina (right) is out of Watford's game with Man City

City midfielder Kevin De Bruyne heads a host of players ready to return for the champions.

The Belgian is now back in training after recovering from coronavirus while Ilkay Gundogan, John Stones and Kyle Walker - all missing at Aston Villa in midweek - are also available again.

Aymeric Laporte returns from suspension and, with Phil Foden and Jack Grealish on the bench on Wednesday after recent knocks, only Ferran Torres (foot) remains on the injury list.

FREE TO WATCH: Highlights from Chelsea's win against Watford in the Premier League.

FREE TO WATCH: Highlights from Manchester City's win against Aston Villa in the Premier League.

● Watford have never beaten Manchester City in the Premier League (D2 L10), losing their last 10 against them by an aggregate score of 37-4.

● Watford have lost 19 of their 26 league games against reigning top-flight champions (73% - W4 D3), the highest loss rate of any side to have played at least 20 such games in English top-flight history.

● Manchester City haven't lost any of their last 10 matches in all competitions in the month of December (W7 D3). Across those 10 games, they have scored 17 goals and conceded only three.

● Man City boss Pep Guardiola has won all nine of his meetings with Watford in all competitions, by an aggregate score of 39-3. Against no side does the Spaniard have a better 100% win rate in his managerial career (also 9/9 vs Bournemouth).

● Man City's Raheem Sterling has been directly involved in 12 goals in just eight appearances against Watford in all competitions (10 goals, 2 assists). Only against Bournemouth (11) has Sterling scored more goals in his senior club career than he has against the Hornets.

● Watford's Emmanuel Dennis has scored in each of his last three Premier League appearances - the only Hornets players to score in four in a row in the competition are Odion Ighalo and Troy Deeney, who both did so across November and December 2015.

● Bernardo Silva has scored four goals in his last seven Premier League appearances for Manchester City - as many as in his previous 55 games in the competition.