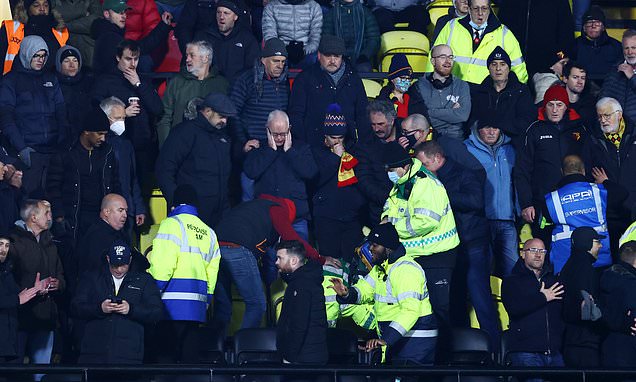 Watford have confirmed the supporter who collapsed during their Chelsea clash following a cardiac arrest is in 'good spirits and being well cared for.'

Fan Larry Brooks required CPR as he was treated by paramedics plus Watford and Chelsea medics, while fans seated nearby also assisted, following Wednesday's incident which led to the match being suspended for around 30 minutes.

Players frantically flagged up the first-half medical emergency and refused to resume the game until they received positive news on Brooks' condition.

Brooks was taken to neighbouring Watford General hospital, where on Thursday he remained under observation and will undergo treatment for an underlying issue.


Watford chairman Scott Duxbury said: 'I would like to offer my personal thanks to those who took quick, decisive and ultimately essential action to help.'

Brooks has also accepted an invite from the club for him and his family to be guests at a future Watford game.

In a statement, the club added: 'Watford FC has kept in touch with Larry during today and, while he's still in hospital under observation, he is in remarkably good form and keen to discuss the Hornets' fortunes for the season ahead rather than talk about what happened to him at the game.'