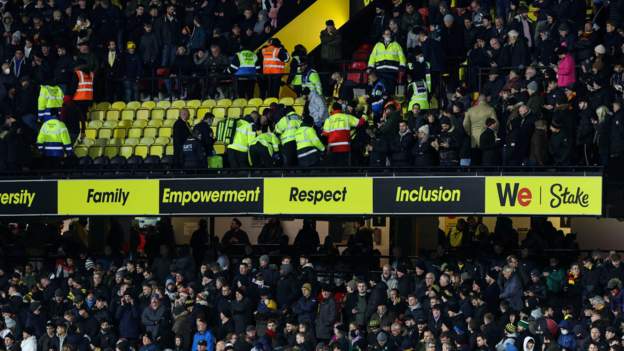 The Watford fan who was taken ill during Wednesday's defeat by Chelsea is in "remarkably good form" in hospital.

Larry Brooks suffered a cardiac arrest during the first half, with play stopped for more than 30 minutes while he received initial treatment.

He remains under observation in hospital but "is in good spirits".

And the Southampton fan who suffered a seizure during their draw with Leicester was released from hospital later on Wednesday.

The start of the second half at St Mary's was delayed by about 15 minutes after the supporter fell ill.

In a statement, Watford said Brooks was "keen to discuss the Hornets' fortunes for the season ahead rather than talk about what happened to him at the game".

"This club is genuinely a family and acted as such on Wednesday evening to look after one of its own," said chairman Scott Duxbury.

"That's how it should be, although we are aware how many individuals as part of teams were responsible for ensuring Larry got the care he needed.

"While those included medical professionals from within Watford and also Chelsea - to whom we offer our gratitude, individuals who assisted also included supporters who sit close to Larry in the Upper Graham Taylor Stand. I would like to offer my personal thanks to those who took quick, decisive and ultimately essential action to help."