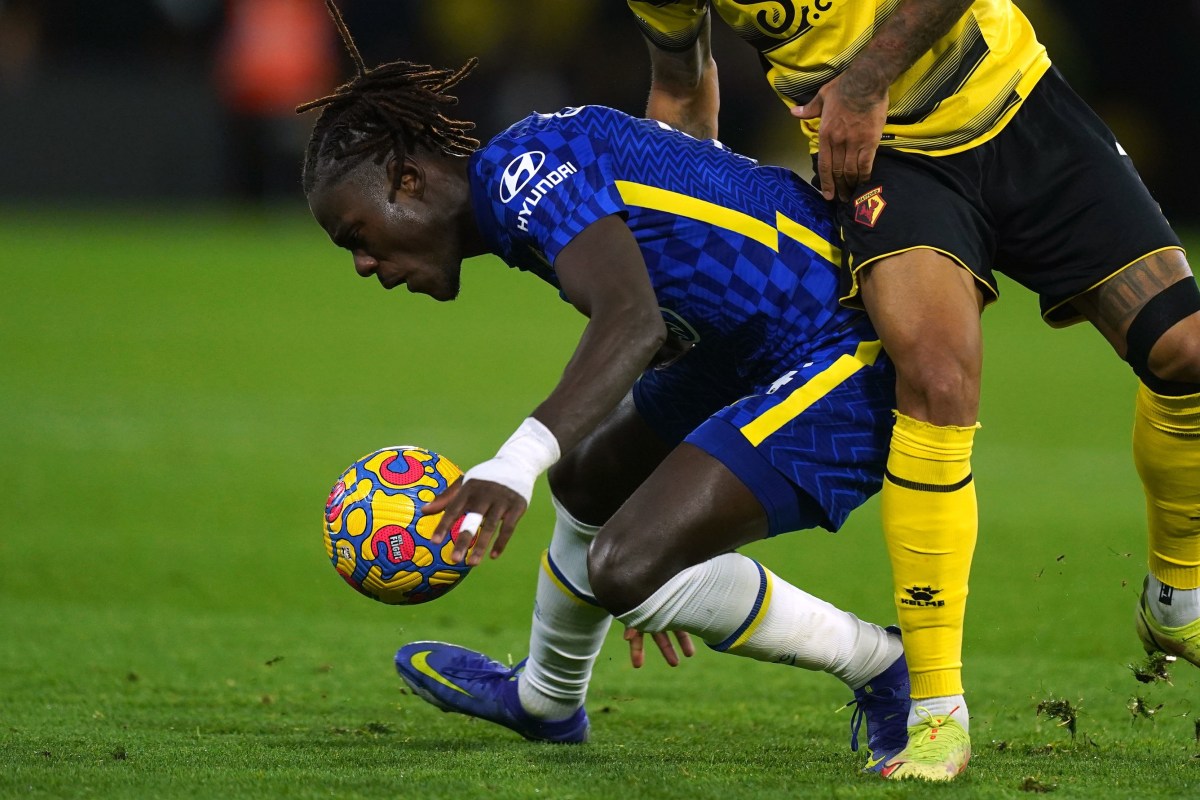 TREVOH CHALOBAH hobbled out of Chelsea's clash against Watford with a suspected hamstring injury.

The Blues ace appeared to pull up in agony with no other player around him.

The 22-year-old was forced offCredit: PA

Chalobah, 22, had been moved into midfield at half-time by boss Thomas Tuchel, after Saul Niguez was hooked.

But he lasted less than 15 minutes in the middle, before needing to be replaced by Hakim Ziyech, with the game finely poised at 1-1.

The Blues' latest injury is a huge blow for Tuchel, with Mateo Kovacic and N'Golo Kante already missing - while Jorginho failed a late fitness test.

After the game, the German said: "The next game on Saturday, the most worried I am is about the injury for Trevoh Chalobah.

"The doctor was on the pitch 20 times today it felt like. It’s a big loss from Trev. I’m a bit worried."

Following Chalobah's substitution, Ruben Loftus-Cheek was tasked with anchoring the midfield, with Ziyech joining the likes of Christian Pulisic, Kai Havertz and Mason Mount in attack.

And on 70 minutes Tuchel finally granted the vociferous away following their wish, bringing on Romelu Lukaku after supporters chanted his name for most of the second-half.

Chalobah's replacement then came up with a huge moment in the 73rd minute, putting his side 2-1 up from close range.

The match had been delayed by over 20 minutes in the first-half, after a fan went into cardiac arrest in the Graham Taylor Stand.

CPR was performed and the supporter was stabilised and taken to hospital beforew play was able to resume.

Mount was able to fire his side into a 29th minute lead, converting from Havertz's square pass.

Watford came roaring back, however, with Emmanuel Dennis' deflected effort levelling things up on the stroke of half-time.

Ziyech then provided his big moment to put his side 2-1 from the bench, however, before taking a knock himself just minutes later.

The Moroccan could have had another on 82 minutes, only for his header to be saved by Daniel Bachmann.

He then required lengthy treatment a few minutes later, much to the ire of home supporters - but was able to continue.

The Hornets huffed and puffed to the end, but were unable to prevent Tuchel's league leaders from sneaking home with a 2-1 win.

Hakim Ziyech celebrates his first goal of the seasonCredit: Reuters

Chalobah was substituted early in the second halfCredit: PA