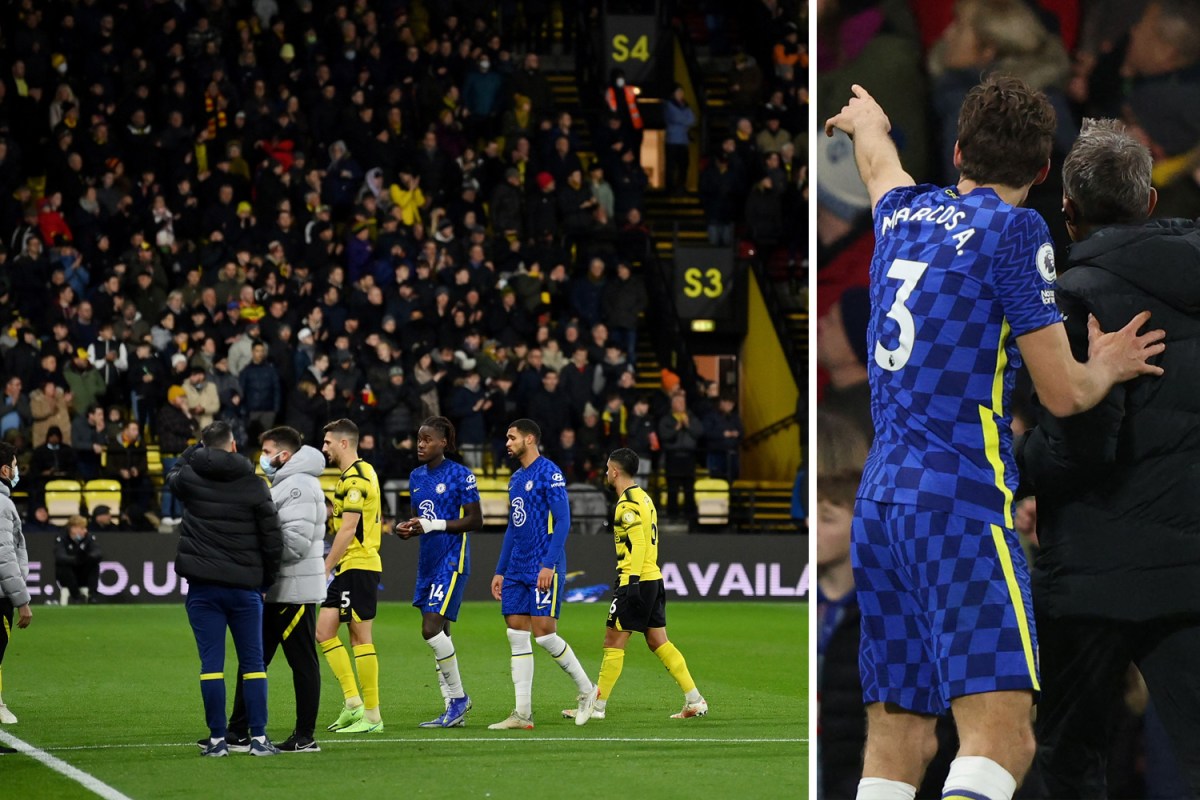 WATFORD vs Chelsea had to be stopped for nearly 30 minutes after a supporter had a cardiac arrest in the stands at Vicarage Road.

Hornets ace Adam Masina had been down receiving treatment for an injury when Marcos Alonso frantically alerted Chelsea medical staff to an incident in the Graham Taylor Stand.

Marcos Alonso spotted the emergency in the crowd as a fan suffered a cardiac arrestCredit: AFP

Watford vs Chelsea was paused for nearly half an hour as a fan received treatment and CPRCredit: Getty

The players left the field of play after 12 minutes of the matchCredit: Reuters

The players returned to the pitch after 23 minutes with the fan being taken to hospitalCredit: Reuters

Blues medics sprinted across the pitch to address the situation and CPR was performed.

The fan was stabilised and taken to the hospital - which is situated next to the ground.

After 23 minutes off the pitch, the players returned to the pitch for a five minute warm-up.

A Watford statement read: "The players have returned to the field in preparation of play resuming.

"Our thoughts are with the fan – who had a cardiac arrest but has now been stabilised – and all those affected. Thank you to the medical staff, players and fans for their quick response."

And Chelsea added: "The thoughts of everyone at Chelsea Football Club are with the fan and all those affected.

"Our thanks to the medical staff here at Vicarage Road for their quick response."

Meanwhile ex-Bolton Wanderers player Fabrice Muamba, who suffered a cardiac arrest on the pitch at White Hart Lane in 2012, praised former team-mate Alonso for his quick response to the situation.

After the game, Chelsea boss Thomas Tuchel said: "Both of the medical teams were very fast to help the person. All the best from us at Chelsea and the dressing room.

"The referee decided for the teams to go into the dressing room to give the medical people time to help with the situation and make sure the players didn't stay in the cold.

"We were constantly informed when we would go out and warm up. This was pretty much it."

After the stoppage, the Blues managed to grind out a 2-1 win.

Mason Mount gave them the lead on the half hour, converting Kai Havertz's square ball.

The Hornets came roaring back, however, and Emmanuel Dennis' deflected effort had them level on the stroke of half-time.

Thomas Tuchel hooked Saul Niguez at half-time, before being dealt a blow less than 15 minutes into the second 45, with Trevoh Chalobah going off with a suspected hamstring injury.

His replacement Hakim Ziyech would go on to be the hero - netting from close range after 72 minutes, with the league leaders able to hold on for a valuable three points.