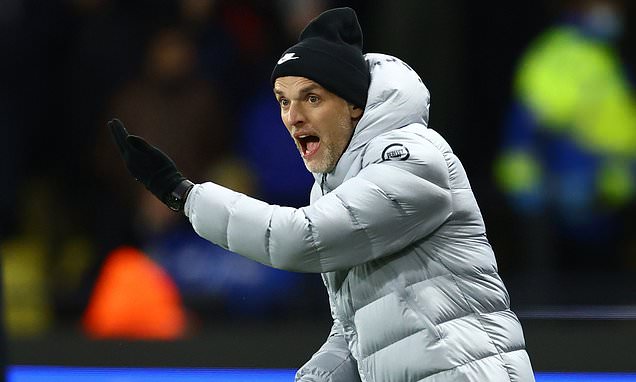 Thomas Tuchel claimed his Chelsea side 'stole three points' with a 2-1 win at Watford and were 'lucky' to keep their place as the Premier League leaders.

The Blues made hard work of their trip to Vicarage Road in a game which saw a Watford fan suffered a cardiac arrest 12 minutes in.

The game was stopped as the supporter was stabilised and then taken to hospital, but after it resumed Mason Mount gave the Blues the lead just before the half-hour mark.

However, Emmanuel Dennis fired in an equaliser into the bottom corner just before half-time, but Blues substitute Hakim Ziyech finished high into the net to ensure they returned to winning ways after their draw against Manchester United on Sunday.


But Tuchel claimed Chelsea were 'absolutely' not ready to face Claudio Ranieri's men and blamed himself for not being able to help prepare the players - in his eyes - in the best way possible.

'We stole three points. We don't have to talk around it. For the first time it feels like a lucky win,' Tuchel told Amazon Prime Video after the game.

'That's not us. We were absolutely not ready today for this match. I missed maybe to find the right approach to make my team ready.

'We had the break due to very sad circumstances – hopefully the person is better. Even this break after the first 11 minutes did not change our approach. We did not cope with the pressure, with the first ball, second ball.

'We had a lot of changes but too many faults. It did not get better. The only thing we could do was hang in there and focus on the easy things. It was a lucky win.'

Tuchel repeated similar sentiments in his post-match press conference, insisting his side were 'very sloppy' and 'underperformed' as a unit.

'(It was a) very sloppy and it was a very unusual performance for us,' Tuchel said after the game. 'I had the feeling we were not ready.

'I have to get the team ready and obviously I didn't prepare them for what was coming because for the first time we were completely underperforming as a team.

He added: 'It was a very unusual performance for us so I think today that I will not like to focus long on this match because we play on Saturday again and there are some reasons that did not make it easy for us.

'Watford played with a lot of enthusiasm and we struggled in the basics. I don't know why but it was like this. We are in this together and we got a lucky win today.'