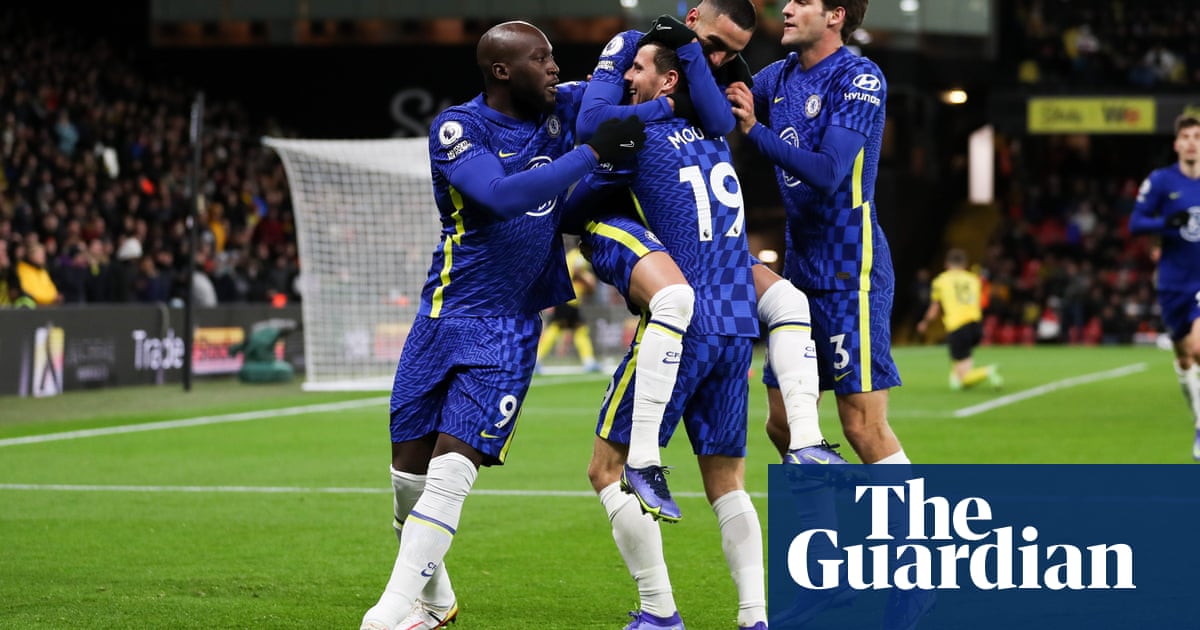 Hakim Ziyech’s Chelsea career has hardly got going but this may have been his most important contribution yet. The forward came off the bench to keep them at the summit on a disconcerting night whose overriding thought was for a supporter who suffered a cardiac arrest during the first half.

A lengthy stoppage ensued, with the players withdrawn to the dressing rooms until the merciful news that his condition had been made stable. Mason Mount gave Chelsea the lead after play recommenced but Emmanuel Dennis levelled and Watford can feel unfortunate not to have taken a point.

The game was 12 minutes old when, after consulting with both managers and the respective captains, David Coote beckoned the sides to leave the field. The nature of the incident was initially unclear: play had already been stopped so that the Watford left-back, Adam Masina, could be treated for an injury when security personnel could be seen rushing to an area of seating in the top tier of the Graham Taylor Stand.

Two Chelsea medics, the first-team doctor Dimitrios Kalogiannidis and the physio Steve Hughes, ran across the pitch to assist; they had seemingly been alerted by players, with Marcos Alonso stationed beneath where the emergency had unfolded. While the area around the afflicted fan was cleared so he could receive attention, discussions began about the most appropriate course of action to take.

After a short delay, Coote took the teams off and the only concern from thereon was the health of the individual involved. It quickly emerged he had suffered a cardiac arrest and news filtered through that the players would not reemerge until they learned the situation had taken a positive turn.

The supporter was treated in the stands for around 20 minutes and then, to warm applause, was taken out on a stretcher with an ambulance waiting. Members of Watford’s medical team could be seen walking back around the pitch, with confirmation following that the man had a cardiac arrest and had been stabilised. Watford publicly thanked the medical staff, players and fans for their quick response to the situation.

Play resumed after a pause that extended to half an hour. Watford had started much the brighter, João Pedro seeing a shot hacked away by Nathaniel Chalobah and Edouard Mendy having to prevent a Cesar Azpilicueta own goal. A much-changed Chelsea side, with six alterations from the draw against Manchester United, appeared ragged against vigorous opponents.

Andreas Christensen, back in the side with Thomas Tuchel dropping the carrot-and-stick treatment he hopes will bring a successful conclusion to contract talks, was a notable starter and so was Saúl Ñíguez, who had only played 47 minutes in the Premier League before this recall to an injury-plagued midfield.

Tuchel’s rejigged selection initially looked more comfortable after proceedings restarted, Mount quickly rapping the near post before going one better on the half-hour. Watford were exposed by an enterprising run from Alonso, who collected a pass from Antonio Rüdiger and laid it to Kai Havertz. The German found Mount to his right and the finish, converted crisply, was in little doubt.

Yet Watford retained a threat, Masina’s replacement Danny Rose stinging Mendy’s palms, and deserved their equaliser. It came after Moussa Sissoko dispossessed Ruben Loftus-Cheek in midfield and fed Dennis, who jinked in from the right before arrowing a low strike that snicked off Rüdiger and across Mendy. Had Sissoko not shot straight at Mendy in added time, Watford would have gone in ahead.

It turned out Saúl’s presence was only of fleeting interest: he was replaced at the break, just as in his sole previous league start, with Thiago Silva coming on and Chalobah moving into midfield. His only contribution of note had been a yellow card. It is some fall from grace for a player once ranked among Europe’s best midfielders.

Chelsea did not look appreciably more solid and were fortunate in the 58th minute when Mendy made an impeccably timed challenge 20 yards outside his box to deny Tom Cleverley, who had been released by Pedro. Moments later Chalobah pulled up with an injury, Ziyech the choice to replace him. Ziyech was immediately booked for a foul and an increasingly odd, frayed affair was finely balanced going into the final quarter.

The substitute’s next act was rather more significant. Tuchel had just thrown on Romelu Lukaku but the winner was conceived via another combination between Rüdiger and Alonso, the former hitting a diagonal ball that the latter headed into Mount’s path. In space on the left, Mount clipped an incisive centre into the path of Ziyech, who buried his first league goal of the season. Chelsea still sit pretty.