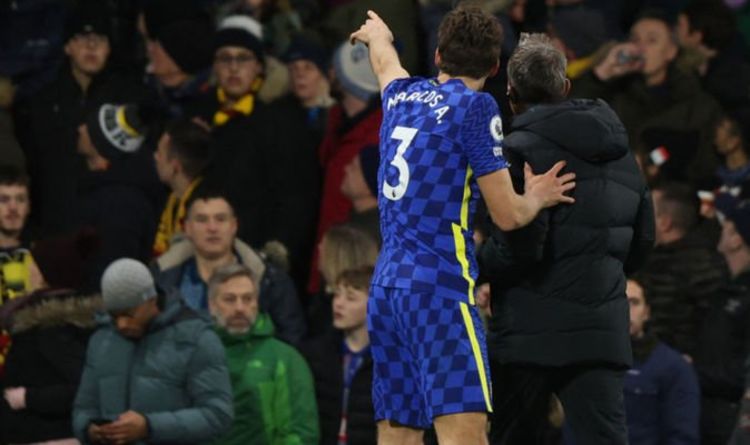 Chelsea left-back Marcos Alonso’s actions ensured immediate medical attention was given to the fan who suffered a cardiac arrest during the Blues’ clash with Watford. A supporter was taken to Watford General Hospital, which is in the vicinity of the Hornets’ Vicarage Road, in a stable condition.

The match was halted around the 10th minute of the game with the score still 0-0.

However, Chelsea’s Alonso was seen furiously gesticulating towards the dugout.

It became clear that the Spaniard was trying to get the attention of medical staff for a supporter in the stand close by.

Alonso was shown desperately trying get the medics to enter the pitch. Staff from both teams could be seen sprinting across the pitch.

JUST IN: Southampton vs Leicester suspended due to medical emergency

They were then led to the fan by other supporters.

The individual, who Amazon Prime reported was a man, received medical attention for nearly half an hour.

Both teams were led off the pitch and into the dressing rooms. It was then reported that the players had agreed not to re-enter the field until they heard positive news about the fan.

An ambulance took the supporter to Watford General Hospital, which sits on the same road as Watford’s stadium, where it was announced that they were in a stable condition.

After the restart, Mason Mount handed Thomas Tuchel’s side the lead in the 29th minute.

However, the Blues were pegged back by Emmanuel Dennis. The Watford forward struck just before half-time.

Defender Alonso was making his eighth Premier League appearance of the season. He scored during the opening day victory over Crystal Palace.

The 30-year-old started the campaign as Tuchel’s preferred left wing-back but lost his place to the in-form Chilwell. However, the England defender is likely to be out for a while having suffered a serious knee injury.