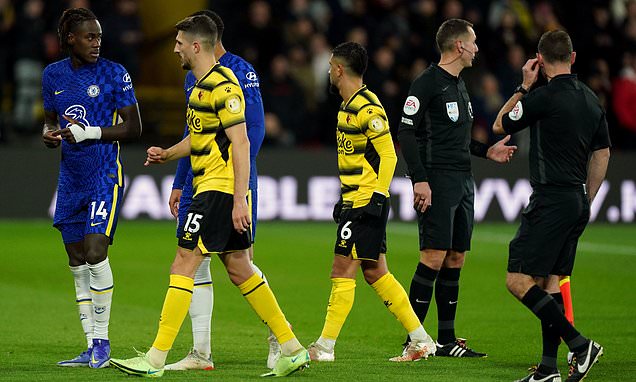 By Kieran Lynch For Mailonline

Watford's Premier League clash with Newcastle has been temporarily suspended due to a medical emergency in the crowd.

Around ten minutes into the game there was concern in the crowd which led to play being stopped with medical staff going across to help.

The referee then took the players off the pitch so attention could be focused on the medical incident.

It follows similar scenes during Tottenham's 3-2 victory at St James' Park back in October.


Amazon Prime who are broadcasting the match reported that the fan has been stabilised and is waiting to be taken to hospital.

An ambulance is being brought to the stadium and fortunately won't have far to travel with the nearest hospital right next to the ground.

There was warm applause from those in attendance as the fan who was taken ill was escorted from the stands by medical staff.

Talking on Amazon, former Chelsea player Joe Cole said: 'That’s someone who’s gone to a football game and found themselves in a precarious position – we just have to be thankful we have the medical staff,

'One thing I would say is that all the football clubs I’ve played for the the medical staff have been fantastic, In a situation like this we just have to be happy the person is stable'

Fellow pundit, and  former England and Liverpool goalkeeper Rachel Brown-Finnis added: 'In football stadiums recently we’ve literally seen live and death situations – in the Euros, you couldn’t be in a better-equipped place to deal with something like this.'