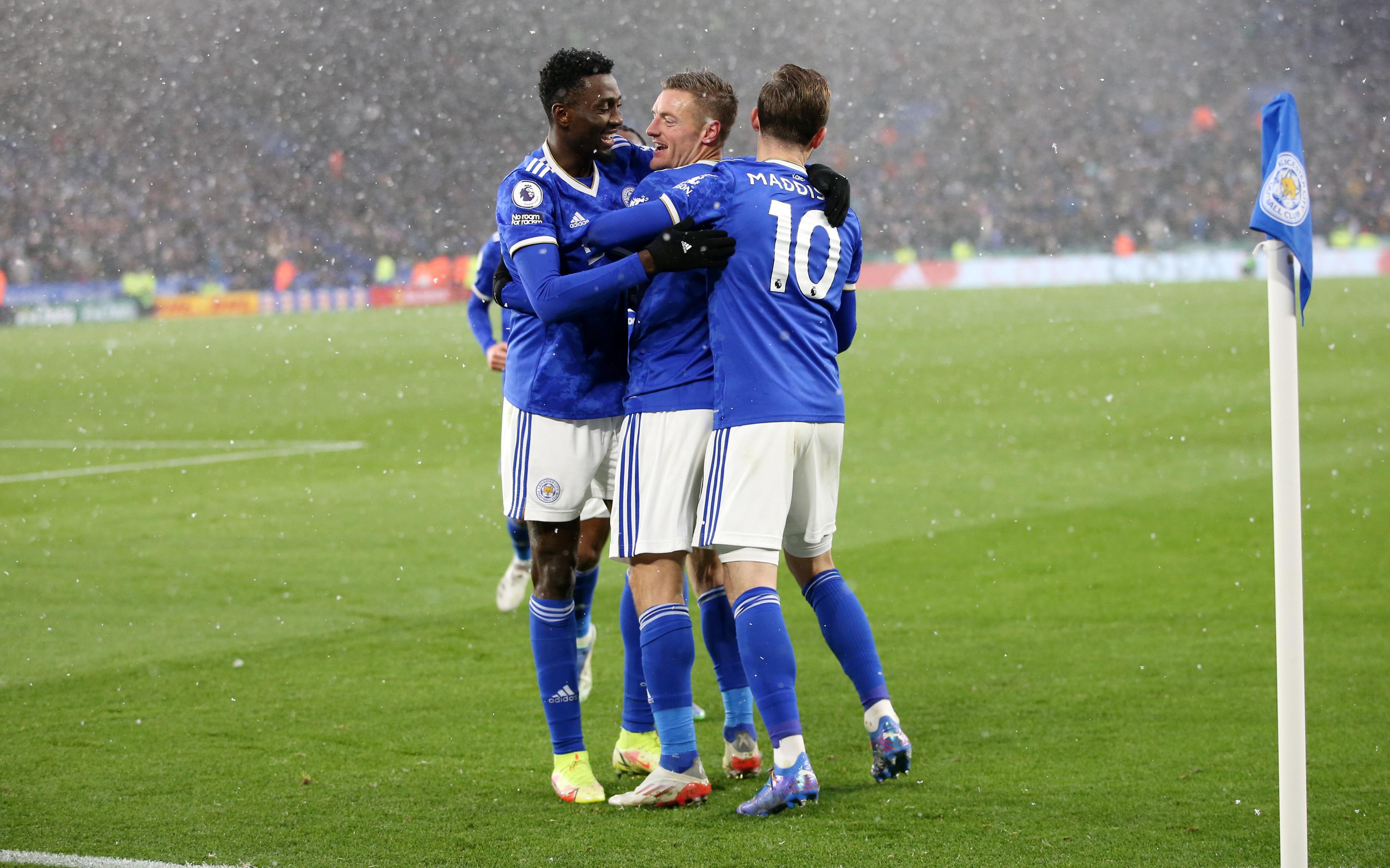 The incoming Vardy was the first man to have an attempt on target, as he tested Daniel Bachmann at the near post after only three minutes. Then, Emmanuel Dennis curled over from 16 yards out, with a deflection helping it behind for a corner.

The opener soon arrived, though. After a spell of possession for the Foxes, Evans sent a long ball down field, and after William Ekong neglected to head the ball away first time, James Maddison was on hand to take a touch before firing past Bachmann - his second goal of the week for Leicester.

As the snow began to swirl around the King Power Stadium, Adam Mesina nodded wide at the far post after meeting former Fox Tom Cleverley's deep free-kick. Vardy was next to head off target, glancing Timothy Castagne's cross over the bar.

Watford were just inches away from equalising on 28 minutes, when Cucho Hernández's 20-yard attempt deflected off Çağlar Söyüncü and hit the inside of the post. However, the Hornets were level not long after, as Josh King converted from 12 yards after Wilfred Ndidi brought down Dennis in the box.

City were soon back in front. Maddison, as he had done in midweek, worked his magic once again, lifting a lovely pass into Vardy, who touched the ball over the onrushing Bachmann and into the net for 2-1.

Vardy was causing Watford plenty of problems, and only a good clearance from Ekong saw his dangerous cross dug out in the box with players arriving. From the following corner, Evans headed off target.

Snowfall began to increase on Filbert Way, as did Leicester's attacking intent. Maddison did wonderfully to work the ball onto his left foot on 39 minutes, only for his strike to curl past the post.

The No.10 was at it again in the lead up to the interval. This time, his excellent corner located the head of Vardy, who flicked the beyond Bachmann for his ninth Premier League goal of the season.

Only a good save by the legs of Bachmann prevented the No.9 from scoring a first-half hat-trick, but Leicester's rampant display in the opening 45 minutes was enough to hand them a two-goal advantage heading into half-time.

Not long into the second half, Claudio Ranieri's visitors had an opportunity to halve the deficit, however an excellent save from captain Kasper Schmeichel - on his 600th career appearance - denied King from close range.

Visibility worsened as the clock ticked on, with Maddison's deflected effort trickling wide of Bachmann's right-hand post, before the stopper got down well to hold onto another attempt from the No.10.

At the other end, under pressure from Ndidi, João Pedro side-footed wide, but Watford did have a goal back just moments later. Castagne was dispossessed by Dennis midway into the City half, and he converted beyond Schmeichel. After a VAR check for a foul on Castagne, the goal was eventually awarded.

Grounds staff were called into action before the game resumed, as they cleared the pitch's lines of snow. After a short pause, play was back underway as City looked to build on their advantage in difficult conditions.

They did exactly that on 68 minutes. Luke Thomas located fellow Academy graduate Harvey Barnes, who squared to Ademola Lookman and the Leicester loanee converted from close range to make it 4-2.

After Söyüncü sliced wide, Lookman made way and on came winger Marc Albrighton. Then, with six minutes of normal time remaining, substitute Ozan Tufan prodded off target from six yards out.

Watford were spurred on at the news there would be seven minutes of stoppage time, however an important clearance from Thomas at the far post repelled one Hornets attack, and there would be no comeback for the visitors.

After strikes from James Maddison, Jamie Vardy and Josh King saw the game heading into half-time with City leading 2-1, the next goal would be crucial.

Should Watford score it, they'd be level once again, however Vardy had other ideas as a header from the No.9 from Maddison's corner made it 3-1 on 42 minutes.

Although Watford were able to reduce the deficit to just one goal, Ademola Lookman was on hand to tap in from close range to make it 4-2 - a strike that ultimately settled an entertaining battle in Leicester.

Speaking on LCFC Radio's Matchday Live from the pressbox at King Power Stadium, Gerry Taggart said: "I gave it to James Maddison on Thursday and I should really do that again because I thought he was excellent. A couple of goals from that man Jamie Vardy got him back on the goal trail, so I’m giving it to Vardy. They were two vital goals."

The Foxes travel to St. Mary's Stadium to tackle Southampton in the Premier League on Wednesday (7:30pm kick-off), and then visit Villa Park to face Aston Villa on Sunday (4:30pm kick-off).