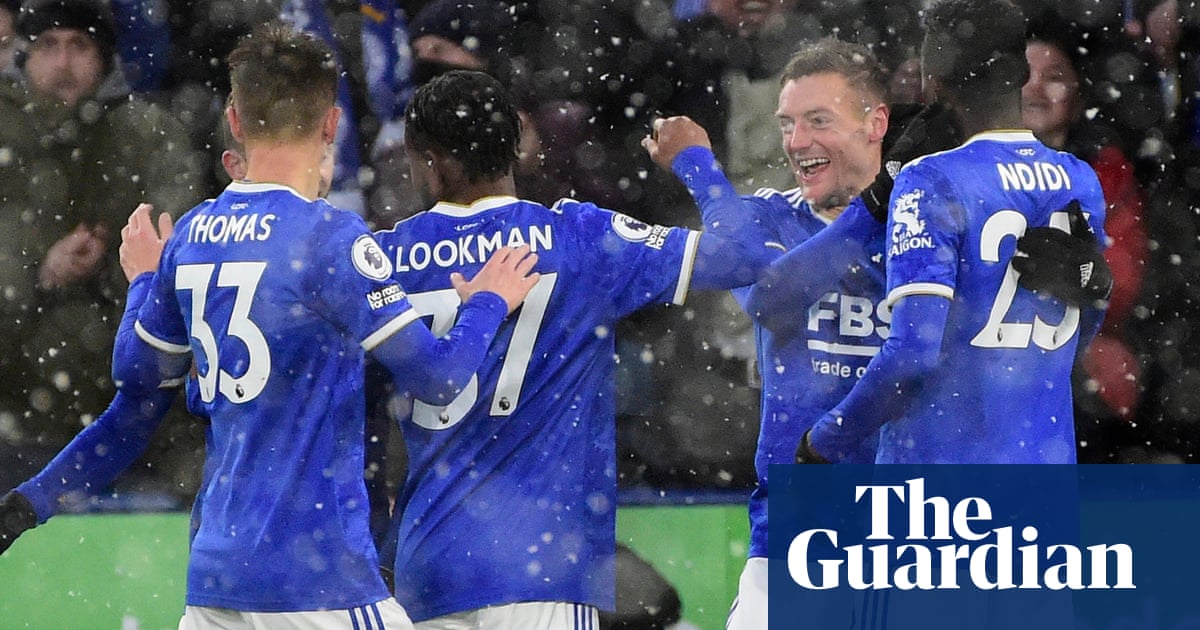 Claudio Ranieri appreciated the heartwarming welcome he received on his first managerial return to Leicester City but Jamie Vardy showed why he has never gone away as his two goals proved the difference between the sides.

The whole home crowd had taken to their feet just before kick-off to chant Ranieri’s name and applaud the manager who led their team to the Premier League title five years ago.

It was an edifyingly emotional moment and clearly moved the Italian, but as the snow swirled around the stadium and turned the pitch white, Vardy was intent on not making this too hospitable a return.

There were handshakes from his former staff for the Watford manager but one of his most important former players had a rather more ambiguous welcoming gesture after giving Leicester the lead in the 34th minute.

Vardy had revealed in his autobiography that his former manager nicknamed him “Radio Wanker” because of his incessant dressing-room chatter and he made a beeline towards the visitors’ dugout after making it 2-1 with a delicately dinked shot over Daniel Bachmann, the goalkeeper, following James Maddison’s exquisite lofted pass.

Vardy raced up the touchline to the benches and pointed towards Mike Stowell, a surviving member of Leicester’s coaching staff, who was stationed behind Ranieri.

Leicester’s leading goalscorer then made his point in rather more traditional fashion eight minutes later, heading on Maddison’s corner into the far corner of the net to make it 3-1 at half-time.

That was the lead Rodgers’ men had held going into the second half of Thursday’s Europa League victory over Legia Warsaw, which had enabled them to play at half pace and allow players carrying knocks to recover for this game.

Jonny Evans had suffered a thigh injury just before that game but, passed fit to start here, the central defender played the free-kick that led to Maddison giving Leicester the lead in the 16th minute.

Bizarrely, William Ekong opted - or received a shout - to duck under the long pass but that simply allowed Maddison to run in on the blindside and swivel to shoot in with his right foot. Following his goal and performance on Thursday, these are signs Maddison is gradually returning towards his best.

However swashbuckling Leicester can look going forwards, however, they are still defensively vulnerable. Kasper Schmeichel was counting his blessings when Cucho Hernández’s shot deflected heavily off Caglar Soyuncu and hit the inside of the post with the wrong footed Leicester goalkeeper happily picking up the rebound.

Then Emmanuel Dennis was tripped by Wilfried Ndidi - who also gave a penalty away on Thursday - and Josh King converted to equalise. It was no more than Watford, buoyed by their 4-1 demolition of Manchester United eight days earlier, deserved.

Then came Vardy’s two goals before the snow came hammering down during the half-time interval, clearly impacting players’ footing. Timothy Castagne, in particular, did not look comfortable.

If only Mohamed Salah has scored more than Vardy’s nine Premier League goals, then only the Liverpool striker has more goal involvements, assists included, than Dennis after the Watford striker made it 3-2 on the hour mark with his sixth goal since signing from Club Brugges for around £4.5million in the summer. He also has four assists.

The Nigerian had just wasted one clear chance he had earned by dispossessing Castagne but then squaring to King instead of shooting when he repeated the trick, nicking the ball off the Leicester right-back again before this time running through and dinking a cute shot over Kasper Schmeichel.

Play was held up for a couple of minutes at this point so that the Leicester groundstaff could sweep the lines of snow. As cries of “Ranieri” rang hospitably around the stadium, Leicester made the game safe when Harvey Barnes got in down the left-hand corner of the penalty area and squared the ball for Ademola Lookman to tap home.