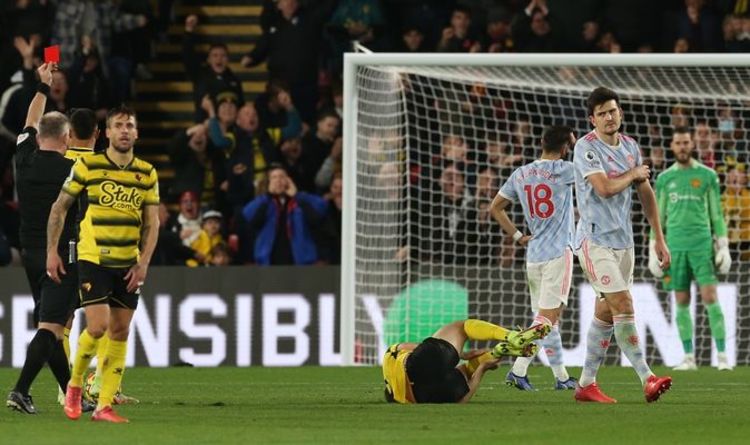 Harry Maguire has been maligned in the wake of Manchester United’s 4-1 defeat to Watford which led to Ole Gunnar Solskjaer’s sacking. The Red Devils captain was sent off midway through the second-half after a costly defensive lapse as his woes in a red shirt continued.

Maguire became one of the first signings under Solskjaer at Old Trafford and arrived from Leicester City as the most expensive defender in history.

Solskjaer immediately saw the England international as a leader in his squad and was quick to make him first-team captain just months after his arrival.

Ever since, Maguire has been an ever-present through the highs and lows under Solskjaer but he has been particularly poor this season.

Harry Maguire was sent off against Watford (Image: GETTY )

And Solskjaer has now been dismissed following a string of embarrassing defeats and United sit eighth in the league table.

Maguire has spearheaded a defence that has conceded 19 goals in seven games, and his form after returning prematurely from a calf injury for the 4-2 defeat to Leicester last month has been labelled in some quarters as disastrous.

United’s humiliation against Watford was a particular low point for Maguire, who will now miss the Chelsea game this weekend through suspension.

Maguire was dismissed for a second yellow card after clumsy play on the ball that left him scrambling and hacking down ex-United midfielder Tom Cleverley.