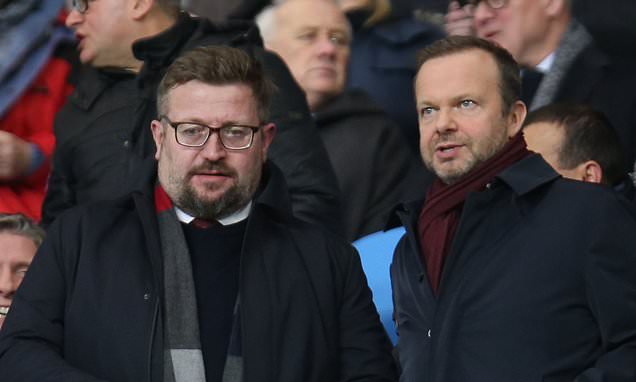 One might imagine that, given the background and potential importance of the fixture, Manchester United’s top brass would have been at Watford in big numbers on Saturday.

But no. Agenda understands neither Ed Woodward nor the man touted as his successor, Richard Arnold, were at Vicarage Road as the club lurched to another low under their watch.

The 4-1 drubbing confirmed what everybody outside the Old Trafford corridors of power already knew and it was Ole Gunnar Solskjaer’s final game in charge.

The absence of executive vice chairman Woodward raised eyebrows, given he is the key decision-maker and is based in Barnes, south-west London, which is hardly a million miles from Watford.


Spare a thought for directors John Murtough and Michael Edelson, who were left to watch the shambles, accept their hosts’ commiserations and then report back to HQ.

But at least United’s popularity off the pitch continues. Various sizes of their shirts are unavailable until mid-January both from United Direct, adidas and a number of retailers including Kitbag and Sports Direct.

The Premier League League are lining up Peter McCormick as the interim replacement for outgoing chairman Gary Hoffman, who announced last week he is to step down .

Harrogate-based lawyer McCormick, viewed as a safe pair of hands, has a similar role at the FA ahead of Debbie Hewitt, who is taking over at the same time as Hoffman’s departure.

McCormick, 69, has previously been acting chairman at the Premier League and would again remain in place until a permanent successor is found. He stepped into the breach at the FA to replace Greg Clarke, who resigned following the language he used when talking to MPs about diversity. Hoffman announced his decision to depart after it was made clear he would not survive a vote from clubs following his role in the Newcastle takeover.

He retained the support of some, who took the view that his hands were tied and that he was a scapegoat.

The England centre back’s luxury six-bedroom pad boasts a gym, steam room, cinema, study and summer house. Now he wants to splash out on a rear swimming pool extension and has applied to the council in Mere, Cheshire, for planning permission.

The lack of a hard-hitting statement from the International Olympic Committee over missing Chinese tennis star Peng Shuai has been widely criticised. The IOC have been urging ‘quiet diplomacy’ to resolve the issue, which some say is an attempt to appease the Chinese and minimise risk to next year’s Beijing Winter Olympics.

Their stance is, fortunately, at odds with many others in Olympic sport. Last week Tony Estanguet, president of Paris 2024, broke ranks, calling for the ‘greatest transparency’.

Peng Shuai has been missing since posting that former Chinese vice-premier Zhang Gaoli co-erced her into sex three eyars ago, and that they had had an on-off relationship

Concerns arose for Peng when she went missing having alleged on November 2 that she had been sexually assaulted by Zhang Gaoli, a former high-ranking member of the Chinese Communist Party.

The British Olympic Association have now joined the sporting bodies expressing concern for 35-year-old Peng’s welfare, echoing the Olympic committees of Germany and Holland in calling for ‘urgent clarification’. A video call with Shuai released last night offered reassurance but serious concerns over her wellbeing remain.

Michael Vaughan may have been left to reflect on his decision-making following a turbulent week for the former England captain after Azeem Rafiq claimed he made a racist remark to him and three other players before a game in 2009.

One PR expert offered his services and was told that they were ‘not needed’. Within hours, and with the furore growing, Vaughan had seen fit to pen a piece for the Telegraph, in which he again denied making the remarks. And in fact a consultant was subsequently taken on.

Meanwhile, Rafiq carried out no fewer than 17 media interviews the day after he gave testimony in parliament in a whirlwind 48 hours for the whistleblower.

A number of clubs across the Premier League and EFL have banned staff from wearing fancy dress at their forthcoming Christmas parties.

Officials have acted amid concerns that some may dress inappropriately and be captured on social media, bringing shame on their clubs.

There could be other reasons for the move. As one unnamed top-flight executive explained: ‘Forced fun is lamentable and should be banned, regardless of whether people are offended.’

British Cycling chairman Frank Slevin will tell today’s annual general meeting that, ‘Ours is a team at ease with itself and who win in the right way’, which some may see as a bold call given the long-running medical tribunal involving disgraced former doctor Richard Freeman.

To be fair, Slevin will reference past troubles and speak about the fact that plenty doubted whether it was possible to prioritise athlete welfare and still win medals.

Concerns that gold medallists will not be invited to this year’s scaled-down Sports Personality of the Year appear to be unfounded.

Some had feared they would not be asked to attend given numbers for the December shindig are likely to be restricted, but BBC insiders have insisted that will not be the case.

Brighton owner Tony Bloom is the latest to do his bit for the environment. Agenda previously reported that Leeds star Patrick Bamford was swapping his McLaren for an electric car and the Seagulls supremo turned up at Villa Park for Saturday’s match in an eye-catching BMW i8, a plug-in hybrid sports car.

Reporters covering England’s fixture in San Marino were left to reflect on the slightly shambolic nature of it all. Following a problem with the floodlights, resolved before kick-off, those who had travelled were told to wait outside a little hut for packs of food and water. The kiosk was locked and a steward, armed with a bunch of keys, came over to save the day, only to find that none of them worked. He then shrugged and booted the door in. Problem solved.