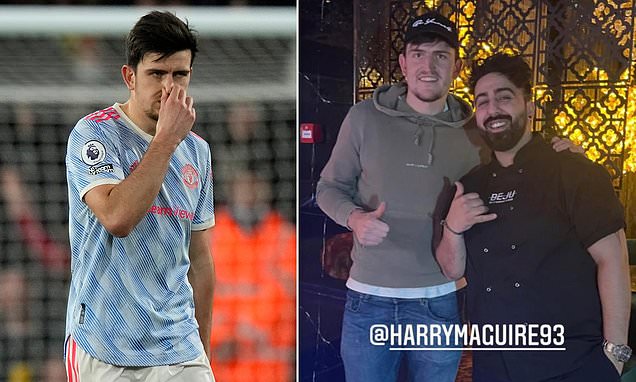 A restaurant in Sheffield posted a picture of Manchester United skipper Harry Maguire enjoying a birthday dinner on Saturday evening, just hours after his red card in the 4-1 defeat at Watford.

Maguire was pictured attending Sheffield restaurant Beju on the eve of his axing, with the eatery initially posting a photo of the defender with a member of staff before the post was deleted.

Harry Maguire was pictured at a restaurant on Saturday after Man United's loss to Watford, with the picture later deleted by Beju, based in Sheffield

Earlier in the day Maguire was given a red card for a rash challenge in the shock defeat, which led to Solskjaer's sacking

His sister Daisy had also shared stories on her Instagram page of the night, with the Maguire family celebrating their father's birthday.


The posts showed the group enjoying drinks and dancing at the plush restaurant after finishing their meal.

It came hours after Maguire was sent off against the Hornets for a second yellow card. He had given the ball away and went lunging in on Tom Cleverley to atone for his mistake, and received his marching orders.

The England centre back has endured a tough season so far, failing to continue the sparkling form he showed for the Three Lions at the Euros and picking up plenty of criticism from pundits over his performances this season.

He was slammed as 'embarrassing' by former United star Roy Keane for cupping his ears following his goal against Albania despite his poor club form, and faced calls to lose the United captaincy.

Solskjaer had given him his backing before the game against Watford, calling him 'an absolute stalwart on and off the pitch'.

'No, I have not considered taking the captain's armband away from him,' Solskjaer said, via the club's website.

'He's been an absolute stalwart on and off the pitch for us since he came in and he's been a true leader in all aspects.

'We've all been very happy with him and we will back him because he is such a top professional. He is going to prove those critics wrong.

'I know the so-called experts have their opinions, and that's their job to put their opinions across, but that's not something we have to worry too much about.

'As a true example of a Manchester United player, Harry is always there for his team and his country.'