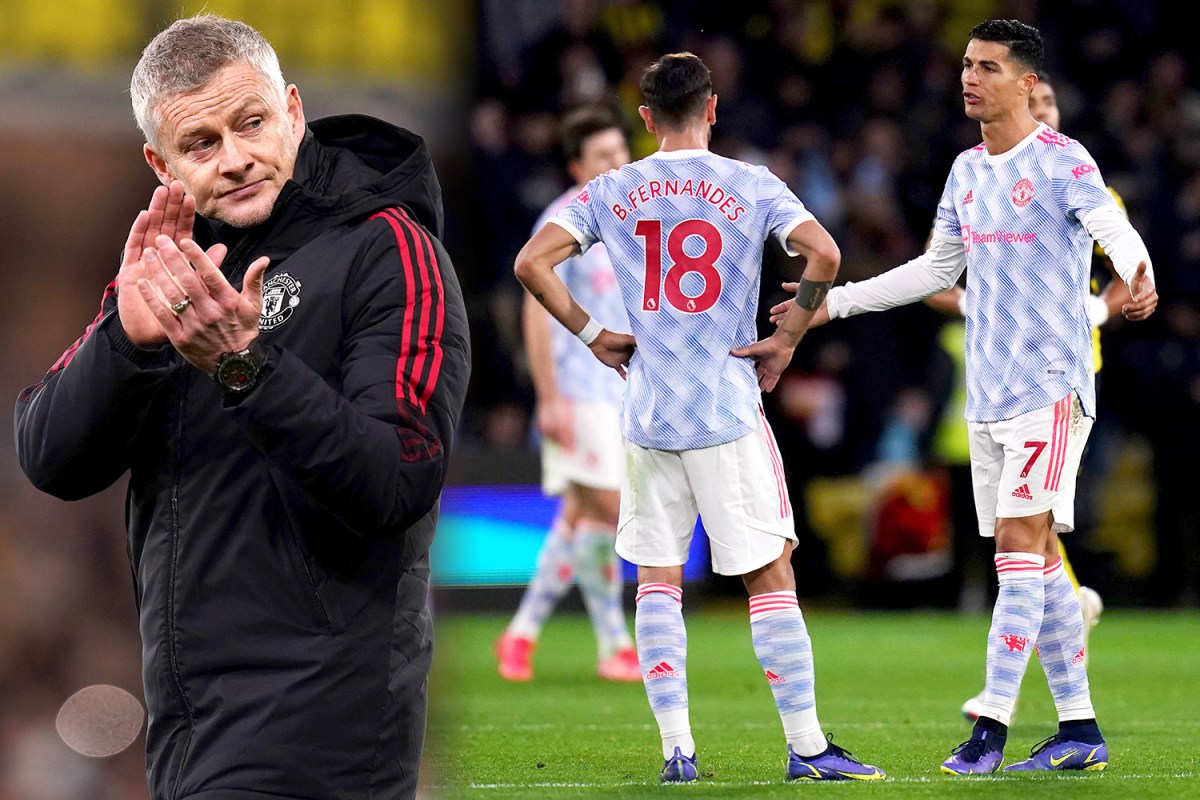 But he is on the brink of being sacked after United called an emergency board meeting within an hour of yesterday’s humiliating 4-1 Prem thrashing by Watford.

Ole Gunnar Solskjaer is on the brink of being sacked by Man Utd after their 4-1 loss to WatfordCredit: PA

Bruno Fernandes was visibly upset as the club’s loyal away supporters turned on former hero Solskjaer after a defeat keeper David De Gea branded 'embarrassing', 'unacceptable' and a 'nightmare'.

But a delusional Solskjaer said: “I always have belief in myself. The results are difficult, of course. But I believe we can turn this around. I feel for the fans, I feel with them and feel the same as them.

“We’re embarrassed losing the way we do. We know we’re in a very bad run, but that’s part of football and I know they’ll support the team. Sometimes you’ve got to say sorry and that’s what I did.

“I understand, that’s their right to show their opinion. Bruno is such a passionate man and he knows football can change quickly.”

When asked about his position, Solskjaer added: “I’m not going to discuss my future now. I am feeling very, very low.

“If the club are thinking about doing something, that’s a conversation between us.”

United’s US owners the Glazers are itching to replace him with ex-Real Madrid boss Zinedine Zidane, despite also being linked with Brendan Rodgers, Erik ten Hag and Mauricio Pochettino.

Sacking Solskjaer will cost the club a staggering £7.5MILLION after the Norwegian signed a new three-year deal in July.

But De Gea, 31, insists it was the players, not Solskjaer, who should be blamed after a SIXTH defeat in 11 games.

The Spaniard said: “It was embarrassing to see Man United play like we did today.

It was nightmare after nightmare

“It’s not acceptable, the way we are playing. It’s easy to blame the manager or the staff but sometimes it’s the players. We need to show much more than we are doing.

“It was an embarrassing first half — we could’ve conceded four goals. It was hard to watch the team today, it was nightmare after nightmare.

“We are trying to give our best and fight for the team but something is very wrong. You can see in the games — it’s very low level, very poor.

“Sorry to the fans, once again. This is not the way we ought to play. It’s been very bad for a long time. A club like Man United, we have to be fighting for trophies and to be honest we are far from that.”

Solskjaer admitted the first half display was “very, very poor” and was left clutching at straws.

The United boss, 48, added: “We need to get the players in a better frame of mind to start the game because second half they played well.

I need to get the players to perform better

“I need to get the players to perform better, that’s my responsibility

“The biggest thing now is they’re so disappointed. They’re trying to find their confidence. The second half I was very pleased with.

“Don’t get me wrong, the whole afternoon is so disappointing, so far away from our standards.

“But I have to say the attitude and application on the field, apart from the last 15 or 20 minutes, I thought we played some very good football.”

Solskjaer acknowledged he was under more pressure to deliver than ever after United’s huge £135.5M spending spree in the last window.

He said: “The signings this summer with Rapha, Jadon and Cristiano raised expectations and rightly so. But, at the moment, we can’t seem to find our form.”

Ismaila Sarr recovered from twice failing to convert an early re-taken penalty to score the Hornets’ second after ex-United trainee Josh King had given the home team the lead.

And delighted boss Claudio Ranieri said: “I was confident also before the match. This was a fantastic performance the first half was amazing, amazing.”