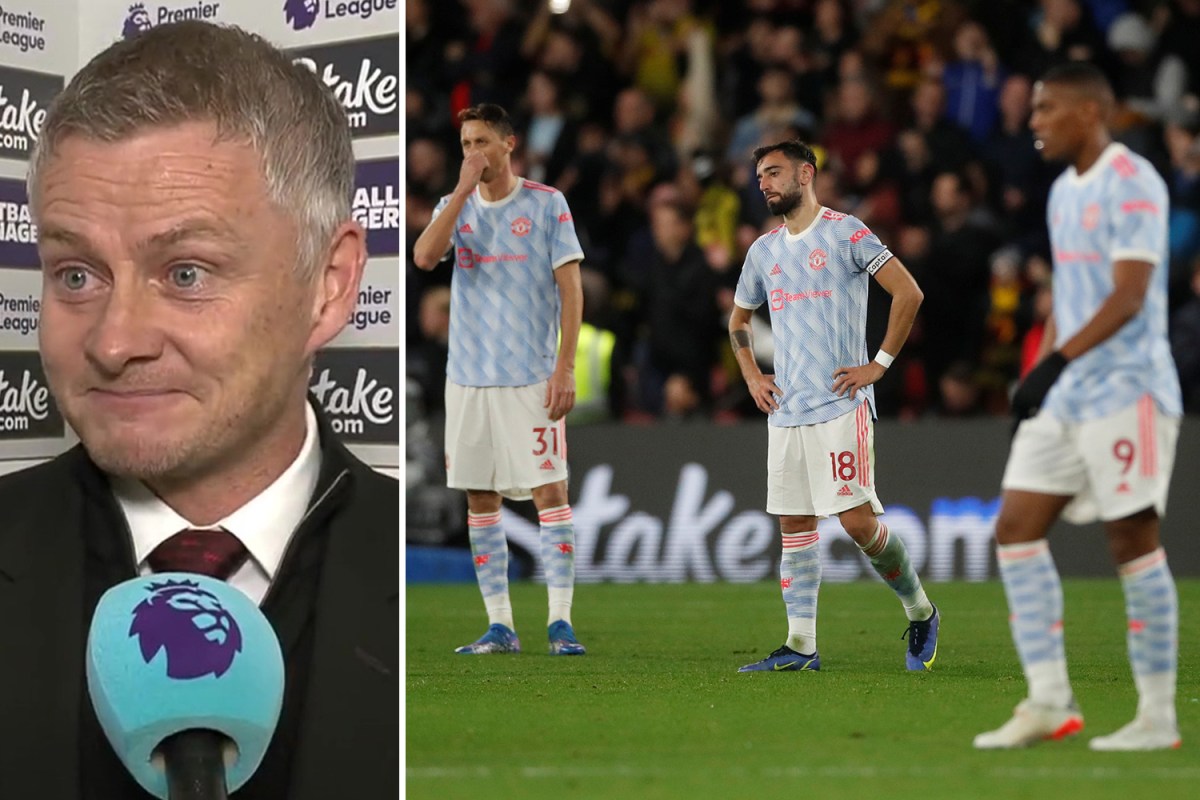 OLE GUNNAR SOLSKJAER apologised for SMILING in his post-match interview as Manchester United lost 4-1 against Watford.

The Red Devils were outclassed by Claudio Ranieri's men at Vicarage Road to leave the club 12 points behind Premier League leaders Chelsea.

United have picked up just four points from a possible 21 in the Premier LeagueCredit: Reuters

Norwegian gaffer Solskjaer was booed by the travelling United fans following the full-time whistle, as Bruno Fernandes argued with supporters before being pulled away.

Spanish goalkeeper David De Gea then hit out at his team-mates after they were humiliated yet again, as he labelled their performance 'embarrassing'.

United sit seventh in the table after picking up just four points from their last seven top-flight matches.

But despite things looking bleak for United, Solskjaer bizarrely smiled when giving his reaction to the woeful display.

Asked why his players weren't in the right frame of mind going into the match, Solskjaer laughed before answering the question, before stating: "Sorry for smiling there, but that's human beings.

"I've got to say you're surprised because all these lads - good lads - top players, top professionals, of course when it's not going for you, it's going against you.

"It's hard to play with that mental break. Second half, we come out, nothing to lose, they play fantastically, scored a good goal, created chances, of course it wasn't enough."

Solskjaer then stated that he has full belief in himself that he can turn things around for United.

He remarked: "I always have belief in myself, but at the moment it's a difficult time for us. I can trust every single one of there to give what they have, but the results are difficult.

"I believe we can turn this round. I understand the fans, who have supported the club through thick and thin, and have been great over the last few years.

"It’s a difficult period, we have had a hard time since Sir Alex left, and the fans who have been here - since I came in - have been unbelievable.

"They understood the situation, the signings this summer raised expectations, rightly so, because we brought some top players in and having been second last year we hoped to kick on.

"At the moment, we can’t seem to find our form, and it’s their right to show their opinion. But as Bruno is such a passionate man, he knows football can change quickly."

But it looks increasingly likely he will be relieved of his duties with United calling a board meeting to discuss his axing.

And the club are claimed to be desperate to convince Zinedine Zidane to take charge should Solskjaer be axed.

It was reported earlier in the week how Zizou's wife Veronique was not keen on relocating to Manchester, despite the Frenchman open to a move to Old Trafford.