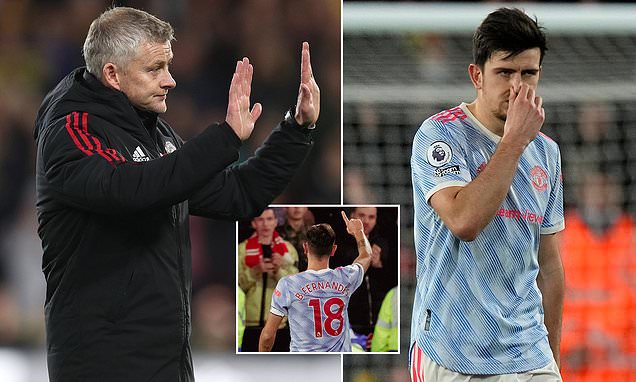 Defeat to Watford has pushed Ole Gunnar Solskjaer to the brink at Manchester United and the boos rang out from the away end following a 4-1 humiliation at the hands of Claudio Ranieri's side.

Losing 5-0 to Liverpool was galling, losing so convincingly at Old Trafford to Manchester City was another but losing at Watford, who had not picked up a win since Ranieri took charge - until today - was something else.

United fan and writer Scott Patterson, of the Republik of Mancunia website, gives an insight into the mood of the fanbase after this latest humiliation and why there is no way back for Solskjaer...

Watford had lost four of their last five games in the lead up to Saturday afternoon's game against Manchester United.


The impressive 5-2 win over Everton, sandwiched between those poor results, looked to be a weird anomaly that was unlikely to be repeated. But then Ole Gunnar Solskjaer's side made the journey to Vicarage Road.

The first half made the United manager's press conference of the day before more cringeworthy with every passing minute.

He had claimed that they had addressed the huge failings that had seen his team battered by rivals Liverpool and Manchester City before the international break.

'We've corrected a few things, put a few things right,' he claimed. 'We've of course made sure we've prioritised a couple of things that needed to improve the most. I'm sure we'll see a reaction and a good team performance tomorrow.'

If Watford were half decent, they'd have been four or five goals ahead after the first 45 minutes.

They calved United open time and again, with United players creating more opportunities for the opposition to score than for themselves. The humiliation was delayed thanks to Watford repeatedly falling at the final hurdle.

David de Gea saved Bruno Fernandes' blushes, twice, when saving from the penalty spot after the Portuguese midfielder sliced the ball back towards goal, leading to the spot kick decision.

Aaron Wan-Bissaka could have let a stray ball go out of play for a goal kick but instead headed it back in to help set up Watford's first goal, with United having escaped the deserved deficit before that point, despite their wayward passing and sloppy concession of possession in their own half.

The centre back pair of Harry Maguire and Victor Lindelof clearly felt like marking players in their box was unnecessary, with Josh King being presented with a free header and then there was no attempt to close down space when Ismaïla Sarr put his club 2-0 ahead.

'It's not acceptable - the way we were playing and doing things. It's easy to blame the manager or the staff but sometimes it's the players. We need to show much more than we are doing,' he said.

'Embarrassing first half - we could've conceded four goals in 45 minutes. It was hard to watch the team playing today - it was nightmare after nightmare. It's not acceptable.

'We are trying to give our best and fight for the team but for sure something is very wrong. You can see in the games - it's very low level, very poor. Sorry to the fans, once again.'

One of the few positives to the afternoon was Jadon Sancho's second half performance and it was his ball in to Cristiano Ronaldo, who selflessly headed the cross down, which led to United's only goal of the game. Substitute Donny van de Beek, who has largely been overlooked by Solskjaer throughout his time at the club, scored a tap in and put in a shift he could be proud of.

The momentum was with United at this point and you wouldn't have been surprised to see them scrape an undeserved draw or even go on to win. But captain Maguire had other ideas. A careless first touch saw him lunge in on Tom Cleverley in an attempt to recover possession, but didn't win the ball, and was deservedly shown a second yellow card.

Roy Keane had been scathing of Maguire's goal celebration against Albania for England, as the defender slid on his knees cupping his ears, as if every criticism of his appalling displays for United over the past month or so weren't entirely deserved.

'I think he puts his hands to his ears like he's shut the critics up, but I think that's embarrassing,' Keane told ITV.

'He's been a disgrace the last few months for Manchester United. If he thinks [when] he scores he's going to shut his critics up… embarrassing.'

The embarrassment only intensified with that sending off, which ultimately stopped United in their tracks, in a game they went on to lose 4-1.

The most galling moment of it all though was Solskjaer's hand slap with the disgraced captain as he exited the pitch.

Maguire let the team and the fans down dreadfully, yet again, and the result on Saturday will likely cost the manager his job, yet Mr Nice Guy still couldn't bring himself to deliver the shun Maguire deserved.

That moment perfectly encapsulates what Solskjaer's United has become, with him offering far too many chances and excuses for his failing players, too afraid to make brave decisions for the sake of the team. Maguire, Wan-Bissaka, Luke Shaw, Fred and Scott McTominay have been appalling for the majority of this season but have remained in the starting line-up.

In the long run, Maguire likely did Solskjaer a favour though, as picking up any points on Saturday would have prolonged the manager's time in charge, when it has been clear for some time that it's time for him to go.

After leading his squad to being runners up in the league last season, denied a trophy in a sudden death penalty shoot-out, it would have been less humiliating for the manager, and less destructive for the club, if Solskjaer had moved on in the summer.

He did a good job, he steadied a dysfunctional ship post-Mourinho and made some good signings. A genuine title challenge was beyond his capabilities but he transformed the depressing culture at the club for a time.

Yet it is time for Solskjaer to go, there is no-one in the fan-base that wants to see him stay

But enough is enough.

As the players and manager applauded the travelling fans at full-time, Fernandes, who had a stinker, indicated it was the players who should face the brunt of the criticism. And he's right, the players do have to accept responsibility for being incapable of finding a team-mate a few yards away, not marking opposition players in the box, firing the ball miles over the bar when shooting, but it is Solskjaer who picks the team and gives instructions on how to play.

While you would expect any professional footballer to do the things United players so regularly seem to be unable to do, the manager has to take ultimate responsibility for the lack of direction on the pitch.

The vitriol aimed at Ole on social media is a stain on the club's support, with his legendary status deserving of more respect, but you'll struggle to find a single red who believes Solskjaer should remain in post now.

It's a sad ending to a period which has provided United fans with so much joy, a genuine hero at the club leading the team to so many meaningful victories, but Solskjaer, the players and the fans all need putting out of their misery now and he should be relieved of his duties.

But Solskjaer leaving the club won't resolve United's issues. For as long as the Glazers own the club, United are in trouble. There is no quick fix and no obvious candidate available to take charge. Sacking Ole is the unavoidable decision but it won't resolve the decay that has been allowed to take place at Old Trafford over the past decade or more.