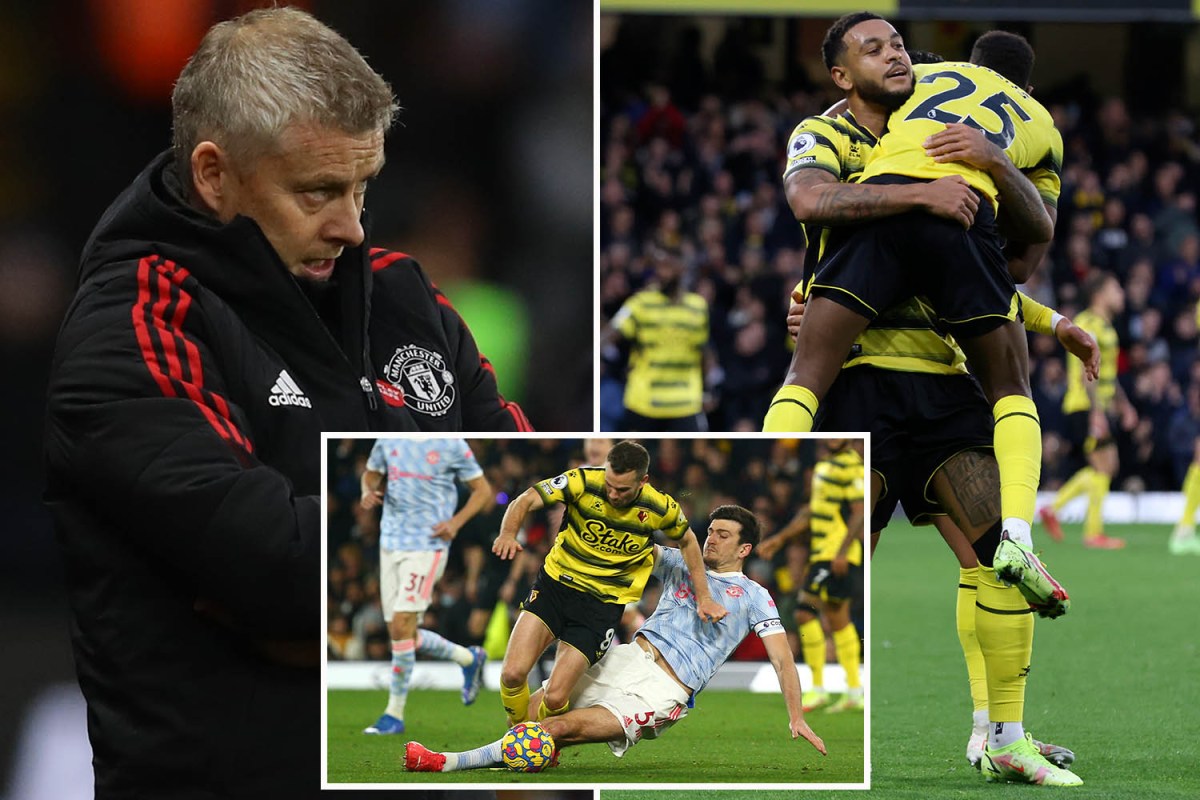 OLE GUNNAR SOLSKJAER is on the brink of the sack after his utterly hopeless ten-man Manchester United were embarrassed away to newly promoted Watford.

Joshua King – a Red Devils academy product – smashed home the opener after 28 minutes before Ismaila Sarr doubled the lead just before the break.

It could have been a lot worse for United at half time as Sarr missed TWO penalties in the space of a minute after having one saved before retaking it for encroachment and David De Gea denied him a second time.

Half time sub Donny Van de Beek grabbed a goal back early in the second half, but skipper Harry Maguire’s red card in the 69th minute ended any hopes of an underserved comeback.

Joao Pedro and Emmanuel Dennis added a third and fourth in injury time to really stick the knife into Ole.

This was Watford’s first home win since the start of the season back in August, and are just four points behind United in seventh.

United have now just one win in their last seven in all competitions.

Ole was clinging onto his job before this after damaging defeats to Liverpool and Manchester City in recent weeks.

But this surely must signal the end and force the United board to finally take action after spending the past month dithering.

The performance at Vicarage Road was nothing short of pathetic from a United side with so much talent on the pitch.

Errors galore. Zero attacking intent. No sign of any structure or ideas.

Jadon Sancho was given a rare start back at the club where he began as a seven-year-old, joining Marcus Rashford and Cristiano Ronaldo in a front three.

United were all over the place from the opening seconds and conceded a penalty after six minutes after a shocking Bruno Fernandes scuffed clearance on the edge of his own box.

King latched onto it but was brought down by Scott McTominay and Jon Moss pointed to the spot only for Sarr’s effort to be saved by De Gea down to his left.

VAR then got involved to inform Moss of several players encroaching so Sarr got a second stab only to go the same way – and so did De Gea.

King now has four Premier League goals to his name after joining in the summerCredit: Reuters

Watford were dominant and could have been ahead had it not been for some indecision and lack of shooting boots from Sarr and King.

But they got their deserved opener after Aaron Wan-Bissaka’s poor headed clearance was picked up by Dennis, whose low cross was tapped home by King.

Man United fans were chanting ‘attack, attack, attack’ but their side were doing none of the sort – instead inviting pressure as King and Moussa Sissoko went close.

Watford doubled their lead through Sarr, picking up a cut-back from Kiko Femenia and fizzing it into De Gea’s far corner.

Anthony Martial and Van de Beek were brought on for McTominay and Rashford at the break, and the Dutch outcast grabbed a goal back with a header in the 50th minute.

Sancho picked out Ronaldo in the box, and his knock-down was gobbled up by Van de Beek.

Donny van de Beek pulled a goal back for United just minutes after coming off the bench at half-timeCredit: AP

Van de Beek celebrated with Cristiano Ronaldo after being picked out by the Portugal internationalCredit: Reuters

Harry Maguire was sent off in the 69th minute after being shown two yellow cardsCredit: Getty

Watford were getting nervous and Ronaldo could have levelled the scores moments later after being put through but Ben Foster – making his 500th career club start – stood firm.

Ronaldo then had the ball in the net in the closing stages, only for Watford to be saved by an offside flag.

Pedro then scored his first goal for Watford with a fizzing low strike, before Nigerian ace Dennis completed the rout after latching on to Ben Foster's long punt.

Nigeria international Emmanuel Dennis sealed a famous victory for Watford with the last kick of the gameCredit: Getty