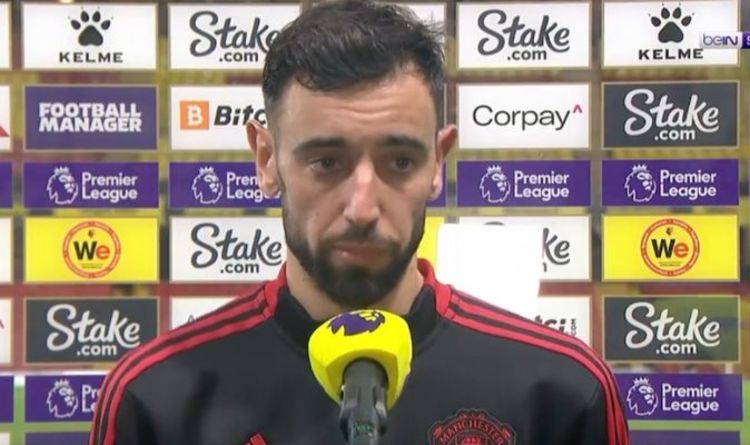 Bruno Fernandes has berated the performance of himself and his Manchester United team-mates after their humiliating 4-1 loss to Watford on Saturday afternoon. With many of the club's faithful supporters calling for the head of Ole Gunnar Solskjaer after their fourth league defeat in five games, Fernandes has backed his manager by claiming it is the fault of the players as opposed to the Norwegian.

United slipped to arguably their most humilating loss of the season after the embarrassing loss to the recently-promoted Hornets in Hertfordshire.

Goals from Joshua King, Ismaila Sarr, Joao Pedro and Emmanuel Dennis consigned United to yet another defeat, leaving them with just four points from a possible 27 in the league.

Ole Gunnar Solskjaer has taken the brunt of the criticism after United's worst run of form since the turn of the century.

But Fernandes has stepped up to the plate and backed his manager, with the Portugal star calling out himself and his team-mates for their involvement in what can now be considered a tumultuous campaign.

Bruno Fernandes has disagreed with Manchester United fans after their loss to Watford (Image: GETTY)

"We did that just for one half, and that is not enough," Fernandes said to beIN Sport.

"In these kind of games in the Premier League, to play like that for just one half is not enough.

"Watford are a good team, they are aggressive, they have quality up front and if you give them chances you will concede goals.

"That has been a problem for us for many games. The attitude in the second half was there but the first half was too sloppy from everyone.

"We don't go on the front foot, we don't try, we don't tackle, we don't win our duels. And against these teams you have to do win them.

"You have to try to keep the same intensity as them, show your quality and show why you play for Manchester United.

“It's everyone's fault. It's not the coach, it's not one player - it's everyone.

Harry Maguire looks on in anguish after his red card (Image: GETTY)

Squad harmony seemed to have taken a hit against the Hornets after fans booed their team off the pitch.

United could drop as low as ninth should results go against them tomorrow in the Premier League.

And having lost Maguire in the game following the United captain's sending off, the club are now in an extremely huge lull when you consider Arsenal and Chelsea make up their next two fixtures.